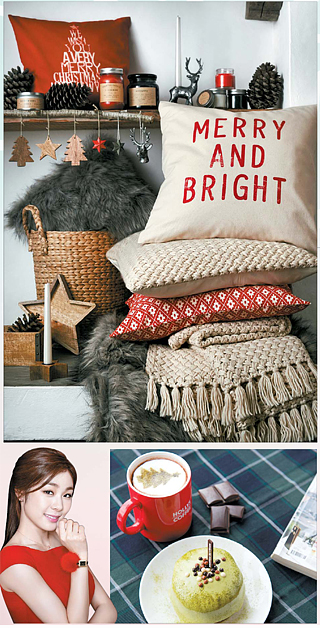 As Christmas and New Year’s Day inch closer and closer, many are on the search for gifts for loved ones and even themselves for a treat.

To fuel excitement from consumers, many retailers are introducing seasonal “limited editions” of their most popular items.
Cosmetic companies lead the way with their products packed in a special gift boxes featuring famous animated characters and designs from globally renowned artists, and other home decor manufacturers as well as food and beverage companies are selling items that can embellish holiday tabletops.
Although many warn against overspending on items that one may not really need, it is hard to keep wallets closed when retail companies are rolling out items that won’t be available next season. Industry officials recommend consumers making lists of items so that they can opt to buy special editions of things that they actually have been thinking of buying instead of getting sucked into the excitement of the shopping season.

As cosmetics are carried by many on an everyday basis, many cosmetic companies are trying to make their products pop so that they can become the talk of the table at parties and events. To encourage buying in bulk, these companies also put together some special packages of their best-selling products, or feature colors that can provide a new, exciting look for special events held at the year’s end.

Anna Sui cosmetics has put two nail polishes and nail care oils in a vintage box meant to give the look of the antique furniture passed down by grandmothers. The company also puts its hair and body lotion in a round-shaped silver ball, which can also be used as an ornament on a Christmas tree. The lotions have sparkles that can make the skin and hair more radiant under light.

“We considered the taste of trendy consumers so we put our products in a jewelry-box-like package,” said Choi Sun-yeong, a public relations manager for the company.

Reflecting that many prefer Nordic designs on many of their winter-themed items, Biotherm has collaborated with design company Hvass and Hannibal from Denmark to make its packaging. Shu Uemura came up with a package inspired by Japanese contemporary artist Murakami Takashi’s flower prints, while Lancome introduced an eye makeup palette with colors inspired by winter in Paris.

Some other companies focus on using cartoon characters on their products. Banila Co. introduced cleansing products in packaging printed with the Pink Panther wearing either a Santa Claus hat or a Rudolf hairband. L’Occitane also uses one of the characters from Line Friends, the popular characters used in stickers on the messaging app Line.

Some companies even held holiday parties so that consumers can come in and experience the products themselves. Cosmetic brand Kiehl’s invited about 200 consumers to show its limited edition items collaborated with New York-based artist Jeremyville at the company’s boutique store in Coex Mall in Samseong-dong, southern Seoul, early this month. At the event the artist Jeremyville was present and drew illustrations in front of party guests that they were later able to take home as their own customized packaging for products.

“I was able to witness the process of a globally known artist with my own eyes,” said 30-year-old office worker Mun Ju-won, who attended the event.

From left: Anna Sui Cosmetics’ has put its lotion in a ball-shaped package, right, to make it look like a Christmas ornament. L’Occitane also released its bubble bath product in a round-shape container; Royal Copenhagen introduces its special collection “Star Fluted” in time for the holiday season. [JOONGANG ILBO]

Have your outfit stand out

This season, many fashion companies are suggesting simple ways to transform everyday looks with special holiday accessories. Jewelry maker J. Estina released a special watch with red accents as a part of the 2016 Holiday Edition Red Tiara line. The simply designed watch features a black band, making it ideal for everyday use. To get in the festive holiday spirit, the watch comes with a detachable round fluffy red ball that adds a cheeky Christmas feel to any outfit. It also introduced a limited number of specially made gift boxes called Red Box for 50,000 won ($41.89) each that come with different types of matching silver necklaces and earrings.

The home interior industry is also gearing up for the festive holiday season.

Annik Goutal also introduced a Christmas edition of its fragrant candles in red packaging highlighted with gold and white, so that the candle itself can be a decorative focal point of any table.

The trend of Northern European design is also widespread in home furnishings as well. Finnish lifestyle brand Iittala every year releases a special red edition of its Teema and Taika collections. Many consumers go after the brand’s popular items in special edition colors which are not available other times of the year.

Danish tableware company Royal Copenhagen introduced a special collection called “Star Fluted,” which features prints of leaves decorated with ribbons, bells, and angels, all of which remind people of the Christmas season. The collection has 13 different items including tea pots, plates, cups and more.

“These limited edition items can really help make the usual tabletop feel more like Christmas,” said Lee Seo-yong, a manager at the company’s Korean division. “When you mix and match these special items with the ones you usually put on a table, the tabletop overall will look more sophisticated.”

The tabletop can become even more fun with food and drinks in packages inspired by the holiday spirit. Ayoung FBC, one of the country’s largest beverage companies, sells a limited number of sweet wines called Santero Moscato in a bottle with snowmen and snowflake prints.

Sapporo Beer has again released a special edition of “the Winter’s Tale,” a type of canned beer that is only released in the winter. This year is the second year the company has released the special edition in Korea, after 29 years in Japan.

Considering that Korea’s own drink makgeolli is white, one of the Korean liquor companies Baesangmyun Brewery released a limited edition red makgeolli bottle for the holiday season.

Coffee franchises are also trying to get into the festive mood by releasing dessert menus that can remind many of the snowy season. Hollys Coffee’s “Cream Avalanche,” a chiffon cake, got its name for its snowy avalanche look, which makes it more fun for the eyes of dessert lovers.