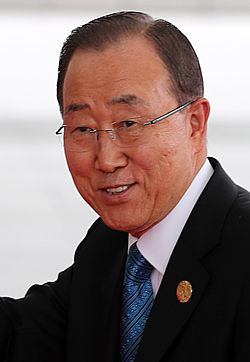 UN Secretary General Ban Ki-moon said he was willing to devote himself to his motherland once he returns home next month in his post-UN career, giving his strongest signal yet that he may run for president in the next year’s election.

“I am willing to devote myself to help in any way for the development of Korea by reflecting on lessons I have learned from my service as UN Secretary General,” said the veteran diplomat during a meeting with Korean reporters in New York on Tuesday.

When asked how he would dedicate himself to the good of the nation, Ban said politics could never be done without political means and vision, commenting, “I will determine it after listening to voices of people from all walks of life.”

The 72-year-old top UN official offered his stinging criticism of the domestic political scene, citing people’s growing disappointment and anguish amid a grave abuse of power scandal that led to the impeachment of President Park Geun-hye.

“I don’t understand why we need to differentiate people who belong to the pro-Park faction and those outside of it,” Ban said.

Such a remark appears to show his intention to distance himself from the current political circle in an attempt to project himself as a politician with a new vision free of partisan interests.

“I can tell you that I have always lowered myself in modesty and I have led no private life,” he said. “I can talk to anyone [regardless of political affiliation].”

It has been months since Ban has been cited as one of the presidential hopefuls to run in the next year’s election. While he has never declared his official bid, he has made comments deemed political and made a visit to former two-time prime minister Kim Jong-pil during his time in Korea, which was seen as his attempt to gain political advice from the 90-year-old on nurturing his presidential ambition.

During the meeting Tuesday, Ban denied media reports that he had shunned from associating himself with former President Roh Moo-hyun to avoid political fallout with the conservative Park Geun-hye government. Ban said he made unofficial visits to the grave site of the former president and made courtesy calls to Kwon Yang-suk, former first lady, on New Year’s Day in past years.

“I have never been accused of being a traitor,” he said. “Such an accusation is an affront to my dignity.”

One of late Roh’s aids wasted no time in refuting Ban’s remark.

“Ban is a person who could not even make a visit to Roh’s funeral because he didn’t want to upset President Park even though the late Roh had done everything he could have for him,” said South Chungcheong Governor An Hee-jung, referring to the former president’s efforts to get Ban elected UN chief while in power.