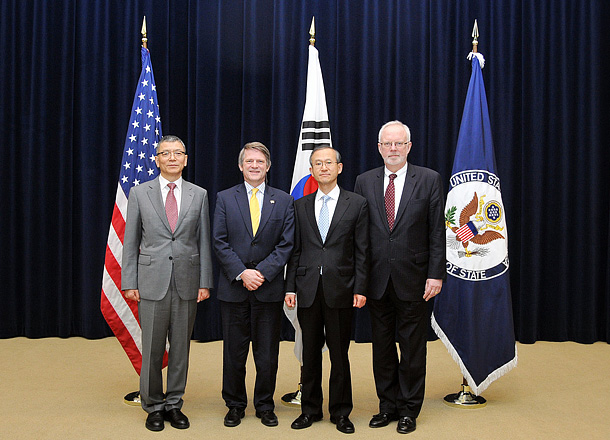 Washington said it will regularly deploy U.S. strategic military assets to the Korean Peninsula to better defend Seoul against Pyongyang’s nuclear and missile threats in a so-called two-plus-two defense and foreign affairs meeting.

The inaugural meeting of the Extended Deterrence Strategy and Consultation Group (EDSCS) launched in Washington on Tuesday and was attended by Korea’s Vice Foreign Minister Lim Sung-nam and Deputy Minister for Defense Policy Yoo Jeh-seung, and the United States’ Thomas Countryman, acting under secretary of state for arms control and David Shear, performing principal deputy under secretary of defense for policy.

“In response to North Korea’s nuclear and missile threats,” they said through a joint press statement, “the officials reaffirmed the commitment of the United States to regularly deploy U.S. strategic assets for the defense of the [Republic of Korea], as well as to enhance such measures and identify new or additional steps to strengthen deterrence.”

The two sides recalled Washington’s “commitment and resolve” to South Korea over the past year, “through clear demonstrations of the U.S. nuclear triad, including multiple B-52 strategic bomber flights.”

South Korean officials were invited to observe the launch of the Minuteman III Intercontinental Ballistic Missile (ICBM) from Vandenberg Air Force Base, California, on Feb. 25 and boarded a nuclear-powered ballistic-missile submarine (SSBN) during its port visit to Guam on Nov. 1.

Washington also “reiterated its ironclad and unwavering commitment to draw on the full range of its military capabilities, including the nuclear umbrella, conventional strike, and missile defense,” to provide extended deterrence for South Korea.

The two countries agreed to form the EDSCG on Oct. 19 during an annual Security Consultative Meeting Carter at the Pentagon between Defense Minister Han Min-koo and U.S. Defense Secretary Ashton Carter, to examine how to strengthen extended deterrence and improve the alliance’s comprehensive deterrence posture.

But the two sides failed to reach a decision on permanent deployment of strategic assets on the Korean Peninsula during this meeting in October.

In light of North Korea’s two nuclear tests in January and September and series of ballistic missile launches this year, Seoul has pushed for the possible permanent stationing of U.S. strategic assets on the Korean Peninsula, such as the B-52 Stratofortress strategic bomber, B-1B Lancer bombers or F-22 Raptor fighters.

“We were able to reconfirm from the United States its pledge toward a permanent and continuous security commitment to the Korean Peninsula and will immediately support South Korea in an emergency situation,” Vice Foreign Minister Lim said to reporters after the meeting. “This sends a clear message to North Korea.”

Lim added that this joint statement was able to build a bridge between the Barack Obama administration and the incoming Donald J. Trump administration on U.S.-Korea security matters.