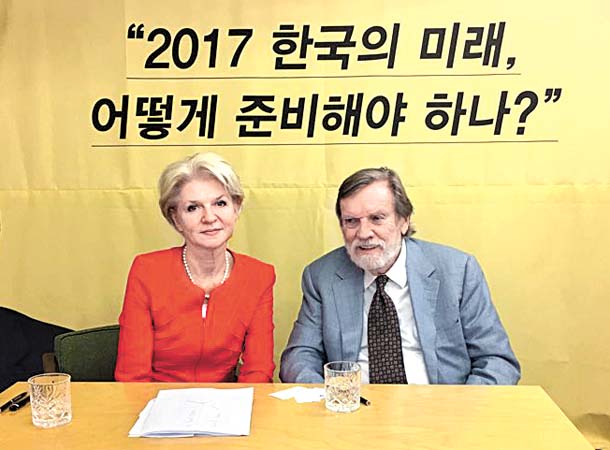 “The world run by the West is coming to an end,” says John Naisbitt. “You cannot fight China’s economic power anymore. What you can do is you chase the tiger.”

Naisbitt, the most prominent futurologist since Alvin Toffler, is the author of the best-seller “Megatrends.” He and his wife Doris Naisbitt were in Korea to promote a book they wrote together, “Global Game Change.”

The couple gave a special lecture about the book and their insights on Korea at Micimpact, a lecture space in Jongno District, central Seoul on Dec.15.

“We grew up with western-centered growth, with the United States as the leader of the West and actually as the global authority while Europe was sure it could become a real counterpart to U.S.,” Doris Naisbitt said.

“The United States, [however], has not reached 3 percent growth for 11 years and the European Union, as we have seen, has been falling apart,” her husband said. “Countries in the global southern belt are now constituting the center of the world.”

The two consider Asia, South America and Africa as parts of the so-called great southern belt, and point to Asia - and especially China - as the belt’s leader.

“When we look at the world and especially from the actions of China, it is obvious that they were building alliances with African, Latin American and Asian countries that form sort of a belt,” said Doris Naisbitt. “The U.S. has lost Latin America because it didn’t help any of the countries there and that void is filled by China.”

According to Mrs. Naisbitt, 30 percent of global middle class spending is already done in Asia as well as 40 percent of the world’s manufacturing. “John was already pointing out that it is Asia where economic drivers will be [while writing his previous book “Megatrends”],” she added.

A major driver of China’s economic growth, the couple said, is in its unique political system in which long-term planning is possible.

“China has proved that an autocratic government can have a market economy and it can be successful,” she continued. “John and I are both from Western democracies, we love our democracy but we must admit that western democracy is in a serious crisis.” Doris Naisbitt is from Austria and John is from the U.S.

“In our western system, two or more parties are competing with each other and only winning by proving the other party wrong,” she added. “What was lost on the path is the interest of the country. While the Chinese system absolutely has flaws, they have a system in which you make your way by achieving economic goals [with long term strategic planning].”

The couple also touched on the political crisis in Korea.

“That must be sucking energy out of everything else,” John Naisbitt said. “It’s very bad for Korea’s name. Don’t get so tied up in the distraction that you put aside all of your ideas and thoughts about the progress of the country and people of the country.”

He added that Korea could become more transparent after the crisis, particularly if ties between politicians and businesses are finally severed.

“It is the political potential that has been damaged, not the potential of the people,” Mrs. Naisbitt said. “Considering the people have brought back their politics and the economy several times [in the past], the country is likely to recover.”

Korea must improve its education system, according to the Naisbitts.

“Young people are forced to compete, to get into the best high school … and then, of course, the pressure mounts,” Doris Nasibitt said. “It is the opposite of what is asked of you in the country, which is innovation and creativity.”