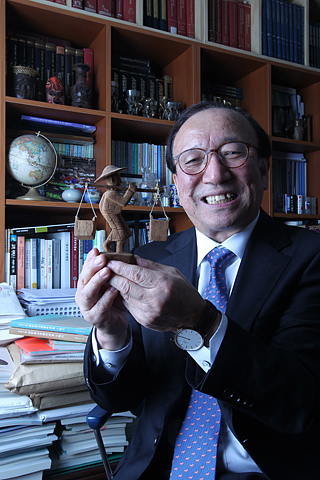 Prahran Market in Australia has a zoo and children’s playground, the San Pedro Market in Cusco, Peru, has fruit stacked all in a pile and in Korea, a university professor who has wandered around 260 Korean marketplaces and over 200 overseas traditional markets for over 37 years has ideas of his own.

Jang Heung-seob, a professor at Kyungpook National University, recently published “World Traditional Marketplaces, Where Are You Going?” In this book, Jang describes his enjoyment of traditional markets. Because he visits traditional markets at every opportunity, people call him an itinerant vendor.

Jang’s love of markets harks back to when he was six years old. Born in Chilgok County, North Gyeongsang, he spent his early years at the Waegwan Market. His father passed away early on and his mother took care of him while she sold fresh and dried fish at the market.

In his undergraduate years, he studied economics and became interested in consumers. Beginning with his appointment as Kyungpook National University professor in 1981, he has traveled to around 460 traditional marketplaces in Asia, Europe, South America and Africa.

After being professor and head of the College of Economics and Business Administration, and head of the Graduate School of Business, he established the Regional Market Research Center in 2005 in North Gyeongsang. Jang was adamant that merchants must cultivate a service mentality for traditional markets to survive.

Around 5,000 merchants were educated in friendly service. He is also planning on operating a merchant “university” in 15 marketplaces. Domestic traditional markets overall are dropping in popularity. “There are five things missing from Korean traditional marketplaces,” Jang said. “Cleanliness, friendliness and comfort need no further explanation. When comparing supermarkets or department stores with traditional markets, of course, there isn’t much to purchase and paying by credit card, receiving receipts, returning goods and getting refunds are impossible.”

He was invited to be head of the Daegu Traditional Market Promotion Center established earlier this year.