Detective returns in ‘Out of Bounds’

Detective returns in ‘Out of Bounds’ 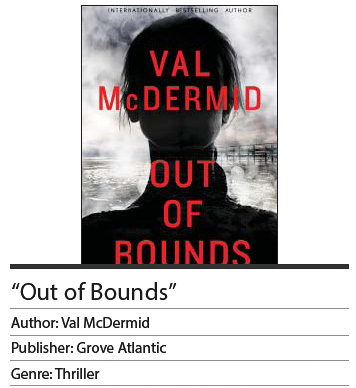 Detective Chief Inspector Karen Pirie has always been a workaholic. But now immersion in her work doesn’t just give her life structure, it also has become a kind of comfort that allows her to deal with grief in “Out of Bounds,” Val McDermid’s latest exciting novel about this Scottish police detective.

Pirie, now head of Police Scotland’s small Historic Cases Unit in Edinburgh, tackles a decades-old murder after 17-year-old Ross Garvie goes on a high-speed ride with three of his friends. A horrific crash results in the death of the three drunken teens and leaves Garvie in a coma.

Karen and her partner, Detective Constable Jason Murray, become involved when Garvie’s DNA is shown to be a familial match to that of a Glasgow hairdresser whose rape and murder has gone unsolved for years. But maneuvering the Scottish legal system to track down Garvie’s male relatives is fraught with complications.

Another case also occupies Karen’s time - the alleged suicide of Gabriel Abbott, who lived in Kinross. The Abbott case isn’t Karen’s, but she becomes nearly obsessed with finding out if his death was in any way linked to the death of his mother, who was killed in a plane crash decades earlier.

The caseload helps distract Karen from her grief over the death of Phil Parhatka, a fellow detective who was killed in the line of duty. She loved Phil and longs to discuss every investigation, twist and theory with him. When not at work, she drinks and walks the streets and neighborhoods of Edinburgh at night to ease her insomnia.

Karen is easily the smartest person in the room. She often infuriates her bosses, who grudgingly acknowledge that her insight and intelligence gets the job done.

McDermid balances the intense character studies in “Out of Bounds” with an inside view of the Scottish legal system and again shows her acuity in producing intelligent thrillers.

Actor Park Jung-min to shutter his bookstore on June 11