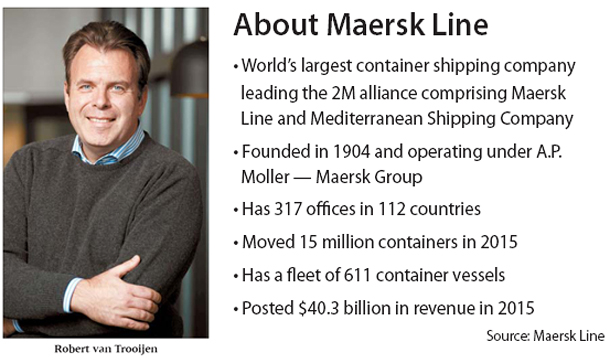 Hyundai Merchant Marine tiptoed aboard the world’s largest shipping alliance, 2M, led by Denmark’s Maersk Line, but it was not enough to wipe out concerns about the shipper’s survival and whether it could take over the business of Hanjin Shipping, the world’s seventh largest container shipper before it sought receivership.

Part of the concern was the recently inked partnership does not include HMM as a formal partner of the 2M alliance. The agreement fell short of industry expectations and even spurred speculation that the Korean shipper may be bullied by the two shipping giants comprising the alliance.

Robert van Trooijen, CEO of Maersk Line’s Asia-Pacific business, brushed off such concerns in an interview on Thursday.

“The way I follow the media in Korea, a lot of the readers don’t really know the history between Korea and Maersk,” Trooijen said. “Also, we should be more positive on Hyundai as a carrier than I guess the media are. Let’s not forget, they are the only remaining national shipping line of Korea.”

Edited excerpts of the interview with van Trooijen follow.

Q. Many say HMM actually failed to be included in the 2M alliance.

A. I’m not sure I follow why there’s such a strong focus on what the collaboration is called. We call it a strategic collaboration and it’s not just a casual collaboration. It’s actually a long-term collaboration with a minimum period of three years. It gives Hyundai access to the whole 2M network on the East-West trades and 2M access to the Hyundai network on the Pacific trade. So it’s each using its strength within the market to create a product that is better than what either of the parties had before.

Which between Maersk or HMM proposed setting the minimum period to three years?

There have been media reports that HMM won’t be able to build ships under the partnership.

Maersk Line has absolutely no influence over HMM’s vessel-ordering ability. They can run their business as they wish; their vessel orders have nothing to do with us.

What was your inclination to embrace HMM in the 2M alliance?

A strong relationship with Korea has played an important role. Most people in Korea know Maersk as a container shipping line but we also have an oil-drilling company and we built our drill ships at Korean shipyards as well. Part of the $23 billion we spent in the last 16 years in Korea building [some 200] ships has been more than just container ships. Korea is an important market to Maersk.

What was your investors’ reaction to the partnership?

We have a healthy respect for Hyundai’s position on the Pacific trade. Hyundai’s market share on the Pacific trade is bigger than Maersk. We see this as a very positive sign for both Hyundai and the customers of Hyundai as well as of 2M. I was actually surprised that there were no more questions to the other alliances as to why they didn’t embrace Hyundai.

You seem confident about HMM’s business recovery though its finances are weak now.

Hyundai has strong support from the Korean market and also from the Korean government. They’ve also shown themselves to be very resilient through the years in this industry. They are the ones who came through the restructuring process with the help of the government. So I think that we are underestimating the ability of Hyundai to be successful. I am very confident that HMM will be a successful carrier in the years to come.

Any prospects for the 2M alliance and the global shipping market in 2017?

There is no commercial discussion or agreement between the partners in the alliance, because that is, frankly speaking, illegal. We all have our separate go-to-market and pricing policies and we compete against each other obviously.

I think 2016 has shown without doubt that the state of the industry is simply unsustainable. And I think the customers in Korea know better than anyone what the cost of not having reasonable prices is to the shippers.

Price and quality discussion is more and more present in the tender discussions today than it was in the same period of last year.

As a result we are seeing a much more healthy debate for the tender season up to 2017. Customers are prepared to pay more reasonable prices for the products we offer. If we look at the trans-Pacific trade for next year, it is showing positive growth perspectives. We can already see [orders before Chinese New Year] building now.