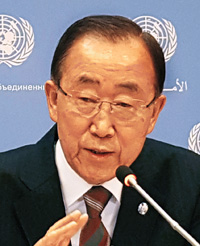 Seeing an opportunity to tarnish its potential competitor, the opposition Minjoo Party of Korea demanded prosecution look into an allegation that UN Secretary General Ban Ki-moon had taken bribes worth $230,000 from a local businessman, signaling its offensive posture against the outgoing UN chief with an approaching presidential race.

“Prosecutors must take on the alleged bribery case swiftly,” said Minjoo spokesman Ki Dong-min on Sunday during a press briefing, “It must lay bare the truth so that the people can make a decision on Ban.”

The Minjoo Party’s swift move calling for an investigation into the 72-year-old diplomat is suggestive of the way it views Ban with alarm as he is widely expected to join the presidential race once he returns to Korea after Dec. 31, when he is scheduled to step down from the UN. In most approval ratings polls for the next president, Ban is neck and neck with Moon Jae-in, the Minjoo’s former chairman who ran in the 2012 race representing the opposition bloc and lost to Park Geun-hye by a margin of approximately 4 percent.

In a report by the weekly Sisa Journal, Ban was reported to have taken bribes on two separate occasions from a South Korean businessman named Park Yeon-cha, former chairman of Taekwang Company, who is already well-known among South Koreans. Park was at the heart of a corruption scandal implicating family members of former late President Roh Moo-hyun in the mid-2000s. Park’s alleged bribing of relatives of the former president led to the death of Roh, who committed suicide amid an investigation in 2009.

Quoting a number of anonymous sources, the weekly magazine reported in an article published Saturday that Park had given then-Foreign Affairs Minister Ban $200,000 in cash in a shopping bag at Ban’s residence on May 3, 2005. It said the alleged bribery took place that day before a welcome dinner for the Vietnamese foreign minister who was visiting Seoul at the time. Park was reportedly Vietnam’s honorary counsel general in Seoul for doing business in the Southeast Asian country.

Citing the same source, the magazine also reported Park had delivered $30,000 through a Korean owner of a restaurant in New York frequented by Ban in early 2007, shortly after Ban was elected the UN chief.

Ban wasted no time rebuking the article that could deal a critical blow to his ambitions for president. UN Spokesman Stephane Dujarric called the allegations “completely false and groundless” in a release and said Ban’s office would send an official letter to the editor-in-chief of the Sisa Journal to cancel the report and offer an apology for false publication.

Many in politics see the timing of the publication indicative of what will be a harsh vetting process of the outgoing UN chief by the opposition bloc should he decide to join the mud-slinging presidential contest on the back of high approval ratings of his bid for president. Ban is largely expected to represent conservatives by either joining the Saenuri Party, or a party in the making by anti-Park Geun-hye Saenuri members. Alternatively, he could form a political party of his own to appeal to both moderates and conservatives. The Minjoo is seen as the least likely party Ban would choose to join.

In the latest poll by the JoongAng Ilbo conducted on Thursday and Friday of 1,000 eligible voters nationwide, Ban was slightly behind Moon Jae-in of the Minjoo Party, 46 percent to 44.2 in a two-way race.

While the Minjoo Party called for a swift investigation into Ban’s alleged taking of bribes, Rep. Yoo Seong-min, a de facto co-leader of the anti-Park camp along with Rep. Kim Moo-sung, told the JoongAng Ilbo on Sunday, “Since I don’t have facts over the allegations, I can’t comment on it.” The Saenuri Party did not issue an official statement on the allegations as of press time Sunday.

The bribery allegation against Ban also came four days after Seoul’s top former diplomat gave the strongest indication yet of his intention to run for president, telling Korean reporters Tuesday in New York that he was prepared to “devote myself to help in any way for the development of Korea by reflecting on lessons I have learned from my service” at the UN. He said he will determine his next move “after listening to voices of people from all walks of life” once retuning home next month.