Third most favored party doesn’t even exist yet

Third most favored party doesn’t even exist yet 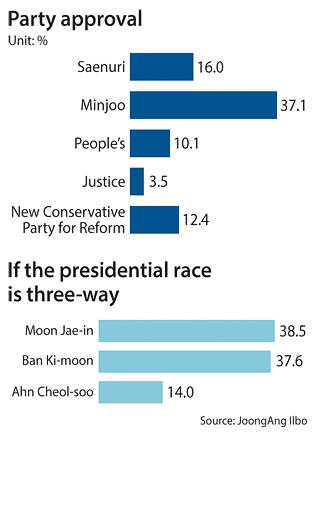 A party that hasn’t even been formed yet by defectors from the ruling Saenuri Party took third place in approval ratings, indicating its potential as a formidable group as a presidential election approaches in 2017.

The party in the making, tentatively called the New Conservative Party for Reform (NCPR), received 12.4 percent approval in a poll conducted by the JoongAng Ilbo on Thursday and Friday, surpassing the People’s Party, which earned 10.1 percent, and closely trailing the Saenuri Party by 3.6 percent.

The poll was conducted among 1,000 adults nationwide and had a margin of error of plus or minus 3.1 percentage points.

The good showing by the NCPR shows its potential to expand its support base and eat into the Saenuri’s once the party lays out detailed policy guidelines and persuades more ruling party lawmakers to defect.

“Once sentiment spreads that the Saenuri Party is controlled by those still loyal to the president in the aftermath of a mass defection, the approval rating for the new party is likely to go up while that of the Saenuri will take a fall,” Lee Taek-soo, director of the pollster Realmeter, was quoted as saying by the JoongAng Sunday.

A total of 35 Saenuri lawmakers declared last week their intention to part ways with the pro-Park lawmakers in the Saenuri to create a new party, with Jan. 20 set as a likely launch date. The move followed the anti-Park members’ defeat in an intraparty vote for party floor leader.

The group of anti-Park lawmakers said they would leave the party en masse Tuesday and register their group at the National Assembly as a negotiation bloc the same day.

Negotiation blocs can send representatives to negotiate legislative calendars and they receive higher state subsidies than parties with fewer than 20 lawmakers.

In the poll, 62 percent approved of the split in the Saenuri while only 25 percent disapproved. Even people in Daegu and North Gyeongsang, turf loyal to the Saenuri, supported the defection. Some 56.4 approved compared to 36 percent who disapproved.

On who should become the next president in the 2017 election, UN Secretary General Ban Ki-moon claimed the top position with 26.2 percent, followed by former Minjoo chairman Moon Jae-in with 24.7 percent. Seongnam Mayor Lee Jae-myung came in third with 11.6 percent and Ahn Cheol-soo of the People’s Party ranked a distant fourth with 6.2 percent.

In a three-way race involving Ban, Moon and Ahn, Moon was ahead of the two with 38.5 percent, while the outgoing UN chief followed with 37.6 in a neck-and-neck race. The software tycoon-turned-lawmaker Ahn came in third with 14 percent.