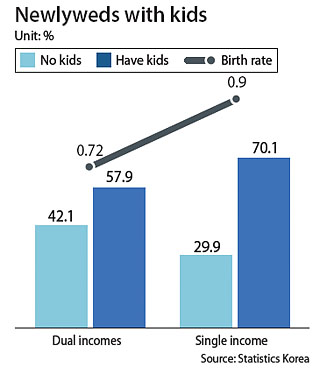 Koreans’ approach to marriage and children continues to evolve.

According to the latest statistics, in one out of five newly married couples, one of the partners has been married before.

And the chances of having children were lower in the case of dual income or high income couples.

According to Statistics Korea Monday, there were a total of 1.47 million couples who were wed from Nov. 2010 to Oct. 2015, and in nearly 20 percent of them, one of the partners had been married to someone else in the past.

The new government data also showed that more than 35 percent of newlywed couples didn’t have a child.

“It appears that Korean couples with both partners working tend to have lower chances of having children compared to those with only one partner working,” said Eun Hee-hoon, a director at the statistics agency.

“And the study showed that people with high incomes tend to have fewer children.”

Data showed that 43 percent of working couples had a child as of October last year.

It took young Korean couples an average of 15 months to give birth to their first child.

The data showed that 57.4 percent of newlyweds don’t own their own residences and a majority of them, or 52.3 percent, were living in the Seoul metropolitan areas.

“We also found that the average age of Korean couples when they marry has gone up compared to the past,” said Eun.

The average age of a Korean husband married for less than five years was 31.8 years old, while it was 29.4 years for a wife.

Meanwhile, 91.7 percent of Korean couples who got married between Nov. 2010 and Oct. 2011 remained hitched as of Nov. 2015. The statistics agency said divorce tends to be higher for couples married only two to three years, and divorces start to drop after four years of marriages.