Sincerity is a flower

Sincerity is a flower 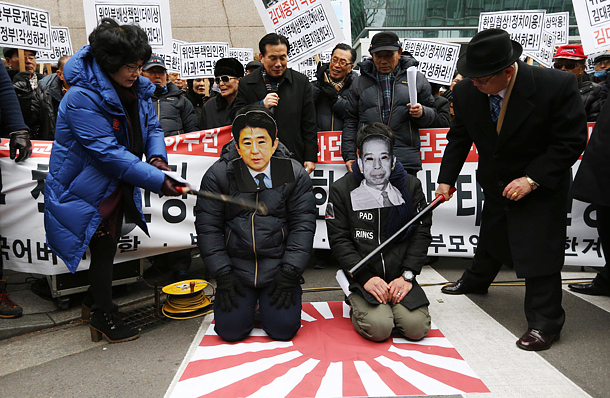 It’s been a year since the “comfort women” agreement was signed between Korea and Japan. Having watched the 20-month-long negotiation and follow-up measures in person, I am not too happy about the first anniversary.

The Dec. 28 agreement was a breakthrough for the three-year-long deadlock in Korea-Japan ties, as President Park Geun-hye insisted on the resolution of the comfort women issue as a condition for a summit meeting. In November 2016, the number of Koreans visiting Japan went up by 18.6 percent compared to the same period last year, and the Japanese visitors increased by 29.5 percent. The agreement positively affected the decision to resume talks for a currency swap in August.

The Foundation for Reconciliation and Healing paid 100 million won ($82,808) to 29 surviving sex slavery victims from the 1 billion yen ($8.53 million) that the Japanese government funded. Two additional victims will receive payment within the year. Among the 46 surviving victims, 34 expressed an intention to take the 100 million won. The significance of the payment is that the money comes from the budget, as the Japanese government offered to “take responsibility.”

However, embers of discord remain. The biggest problem is the attitude that Japan has done its part by paying the victims. The foundation initially discussed a plan to deliver Japan’s message of apology to the victims along with the 100 million won payments. But Japanese Prime Minister Shinzo Abe said in October that this was out of the question, and the plan was scrapped. Tokyo is far from being sincerely apologetic.

It does not help that politicians with presidential ambitions continue to mention that the agreement is not valid. While the Dec. 28 agreement is not legally binding, foreign ministers of the two countries made a promise to the world. There can be supplementary actions through legal processes, but nullification would undermine Korea’s national confidence.

A committee for the establishment of a “peace statue” hopes to build a monument in front of the Japanese Consulate in Busan, and the project will be a crucial moment. The Consulate and Japanese Cabinet Minister openly opposed the project. The Dong-gu District Office in Busan disapproved of the statue as it is not permitted to “occupy the street.”

However, the committee plans to unveil the statue on Dec. 31. The foreign ministry repeatedly claims that this is a case that the local government needs to decide.

It is a problem that is hard to solve. The only solution is to continue communicating and explaining to the victims until they say “enough.”

Japan also must show sincerity to the victims. Japanese Prime Minister Abe visited Pearl Harbor and mourned for the victims there. When he can convey the same message to the surviving comfort women, he will be recognized as a proper leader.


*The author is a political news writer at the JoongAng Ilbo.