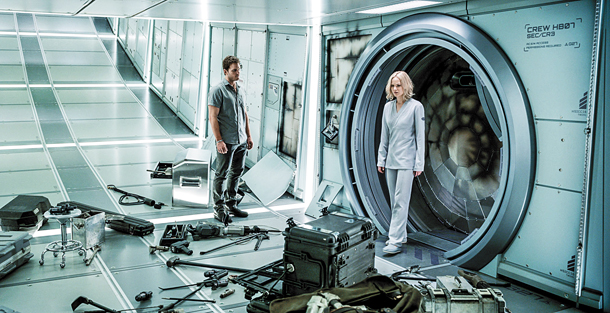 “Perfect script” was how the Hollywood big names Jennifer Lawrence and Chris Pratt described the upcoming science-fiction film “Passengers” during their first visit to Korea two weeks ago. However, when the completed work, directed by Morten Tyldum of 2014’s “The Imitation Game,” was finally shown to the press, it turned out to be far from perfect.

Penned by Jon Spaihts, who also wrote “Doctor Strange” this year, “Passengers” landed on the 2007 Black List, which is Hollywood’s yearly round-up of the best unproduced scripts. Since then, the script has generated huge buzz in the film industry with various big names attached to it until the roles finally landed on Lawrence and Pratt.

Watching the finished work, which cost $110 million to produce, however, one may wonder what the fuss was all about. The North American Christmas weekend box office put “Passengers” at third, proving that Sony’s hope to capitalize on the combined star power of Pratt and Lawrence wasn’t all that successful.

The film follows a mechanical engineer named Jim Preston (Pratt), who boards a massive commercial space liner along with 4,999 passengers to join the 120-year voyage to a remote planet in hibernation. Problems arise when Jim wakes up 90 years earlier than he should have due to a malfunction in his hibernation pod. 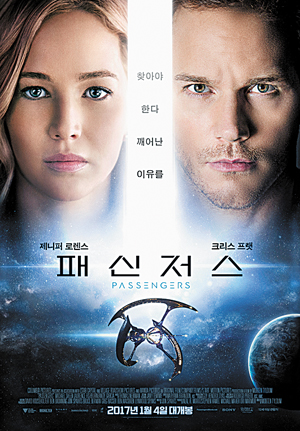 Unaware of how or why his pod malfunctioned, Jim spends a year wandering around the gigantic empty starship in complete and utter solitude. The closest thing he has is an android bartender Arthur (Michael Sheen), who Jim complains of “not having feelings.” Struck with fear that he is doomed to live out the rest of his life without a single companion, the loneliness drives him nuts, leaving him to opt for an extreme choice that raises the question of moral dilemma - to deliberately awake the beautiful journalist Aurora Lane (Lawrence) who he fell in love with upon seeing her face and reading all her books saved in the starship’s data.

After Aurora wakes up and the two meet, the story goes in a direction that anyone who has seen a romance flick would be able to predict. In short, the two protagonists get to know each other, share their sorrows over their doomed fates and fall madly in love with one another until Aurora discovers that she was deliberately awoken by Jim, which she later describes as an act of “murder.” Beautiful scenes in a swimming pool and a bedroom where one can look out at the vast shining galaxy are not enough to make up for the story’s obvious predictability.

When the film veers away from the couple’s relationship and into sci-fi territory, the predictable elements start piling up one by one. An unsurprising malfunction on the starship that could blow up the entire spaceship leads to the sudden introduction of the starship’s manager, who seems to have a clear and very functional role for his appearance: to provide Jim and Aurora with access to the exclusive facilities (only provided to managers) that they need to save themselves and the broken commercial space liner.

Although everything - the futuristic spaceship setting, the acting, music, lighting, editing and camerawork - all seem fine on the surface, the completed work may not fulfill the tastes of moviegoers expecting a perfect film from the “perfect script.”

It certainly isn’t a bad movie, but with other sci-fi blockbusters such as “Rogue One: A Star Wars Story” dominating local theaters, it remains unclear whether the top spot would be given to “Passengers.”

The sci-fi romance, which is rated 12 and over, is slated to drop at local theaters on Jan. 4.