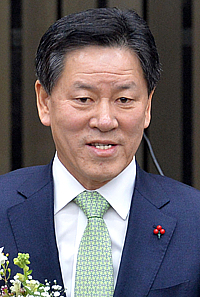 The opposition People’s Party on Thursday elected Rep. Joo Seung-yong as floor leader, cementing its image as a pro-Jeolla region party that is struggling to expand its support base beyond the traditional stronghold.

The four-term lawmaker Joo won 23 out of 35 in-party votes on Thursday on the back of strong support from lawmakers who represent districts in Jeolla, defeating contender Rep. Kim Song-sik, a close ally of the party co-founder, Ahn Cheol-soo.

Joo represents Yeosu in South Jeolla, and his running mate, Cho Bae-sook, who was elected as the party’s chief policymaker on a joint ticket, represents Iksan in North Jeolla.

“We should work for leadership and unity to bring together all forces outside the pro-Park Geun-hye and pro-Moon Jae-in camps,” said the newly elected representative in his acceptance speech, showing his disdain for the former Minjoo Party of Korea chairman, who is second in the latest polls for next year’s presidential race.

Joo also made clear his support for a constitutional amendment, saying political parties must hurry to begin talks on revising the Constitution, which has been left unchanged since 1987.

With the election of Joo and Cho, both of whom represent Jeolla, the People’s Party, which commands the loyalties of 38 lawmakers, reaffirmed its support base in the region, foiling efforts by presidential hopeful Ahn to expand the party’s appeal beyond its traditional stronghold.

Joo will also serve as the party’s interim leader until Jan. 15, when the party is scheduled to hold a convention to elect its leader.

Joo’s election is seen as a protest among the party’s lawmakers from Jeolla, in opposition to the way party affairs have been managed largely by Ahn and former party floor leader Park Jie-won, both of whom had advocated Kim Song-sik and Kwon Eun-hee, who ran as Kim’s running mate.

The party now must find a way to expand its base beyond Jeolla and field a candidate competitive enough to defeat the Minjoo Party’s presidential nominee and represent the opposition.

Ahn Cheol-soo, the unrivaled presidential hopeful among party members, lags behind in most polls on who should become the next president. In the latest poll, conducted by Realmeter from Monday through Wednesday, Ahn ranked a distant fourth with 7.4 percent support, trailing Seongnam Mayor Lee Jae-myung, who received 10.9 percent.

In terms of party approval, the People’s Party came in fourth with 11.7 percent support, trailing the ruling Saenuri, which suffered a mass defection this week and ranked third with 15.8 percent. The nascent party, formed by 30 Saenuri defectors, won 17.4 percent. The Minjoo Party won 33.7 percent.