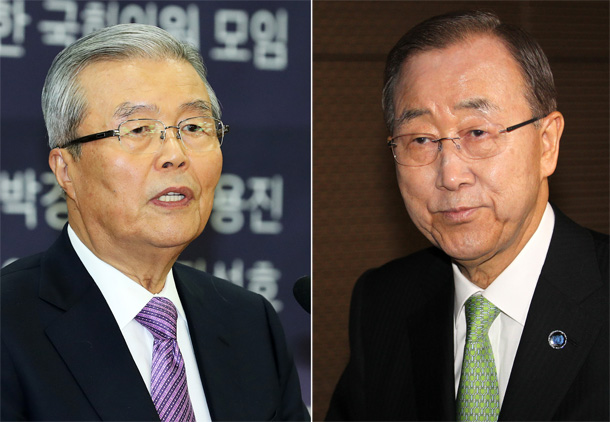 Signals are increasing that outgoing UN Secretary General Ban Ki-moon and former Minjoo Party of Korea chief Kim Chong-in may form a joint campaign team for president based on their shared support for revising the Constitution.

While it is too early to say whether the two men are going to collaborate to win the Blue House in next year’s election, recent reports in New York suggest the soon-to-be departing UN chief is open to Kim’s longstanding demand that the country must amend the constitution to fix the current five-year single term presidential system.

Kim recently floated the idea of cutting short the president’s term to three years for the next president, who will be elected in 2017, so that the next election for head of state can be held together with the general election in 2020.

The 72-year-old diplomat is reportedly open to Kim’s idea, sparking speculation that Ban is trying to find common ground with the former Minjoo leader to have him in his campaign team, should Ban choose to run.

“I have to wait and see Ban’s next move once he returns home,” Kim told the JoongAng Ilbo in a phone interview on Thursday. “If Ban wants to meet me, I will meet him.”

Kim’s remark indicated a shift in his previous assessment of the diplomat, as he has previously questioned Ban’s qualifications as a politician, citing his lack of experience.

One of Kim’s associates, who spoke on the condition of anonymity, said there “has been dialogue between the two men.”

While Ban has yet to declare his official bid for presidency, expectations abound that he will do so once he returns to Korea after he completes his second term at the multinational body Saturday.

Ban gave his strongest indication yet that he will run for president on Dec. 20, when he said he was willing to “help the development of Korea in any way” by using what he has learned as secretary general. He said he will determine his next move “after listening to voices of people from all walks of life” once he returns home on Jan. 15.

Political observers anticipate that if Ban and Kim run together, the two will seek a constitutional amendment to set up a semi-presidential system in which the president will be in charge of foreign and defense affairs, while the prime minister will oversee domestic and economic policies.

Under such a system, Ban will serve as president while Kim, known for his strong support for economic democratization, in which wealth concentrated in the hands of conglomerates will be divested, will assume the role of prime minister.

Moon Jae-in, who is in a neck-and-neck race with Ban in most presidential support polls, outright rejected Kim’s idea of a shortened presidential term, citing the grave responsibility the next administration must bear.

“To fix deep-rooted irregularities in the country as demanded by street protesters with candle lights,” said Moon, “the next government cannot be an interim government. For the next government to do its job, it may even need more than five years in power.”