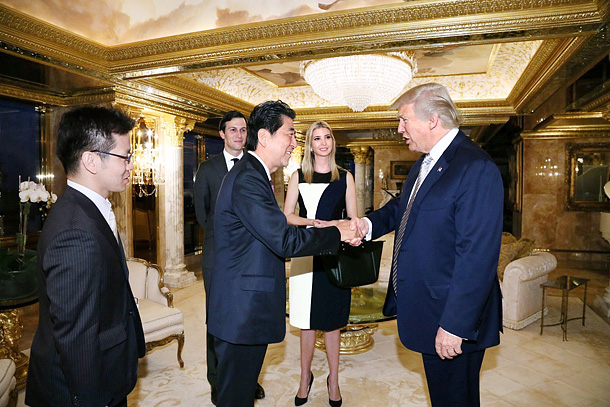 The memorial for the USS Arizona in Pearl Harbor, Hawaii, is exceptional. The structure appears to be floating on the sea. Under the murky waters lay a battleship destroyed by a surprise Japanese attack on Dec. 7, 1941 instantly killing all 1,177 officers and crewmen. The dead remain entombed in the submerged ship. Americans built a memorial straddling the hull to remind themselves of the infamy and violent loss caused by Japan.

Japanese Prime Minister Shinzo Abe stood at the memorial next to U.S. President Barack Obama on Tuesday. The visitor bowed deeply to pay respect to the U.S. servicemen for more than a minute and stood up only when Obama tapped his back. The show of respect followed Obama’s visit to Hiroshima where the U.S. dropped an atomic bomb to end World War II last summer.

But there was another intention behind Abe’s ceremonial visit to Hawaii for Obama before he leaves office next month. A month ago, Abe’s office received a call from the White House. It was after Abe quickly arranged a meeting with Donald J. Trump on his way to an APEC summit in Peru a week after the real estate mogul’s surprise triumph over veteran stateswoman Hillary Clinton in the U.S. presidential election. The White House protested the meeting with Trump and reminded Tokyo that there was still just one president in the U.S. Abe was granted the go-ahead on four conditions.

The White House said the meeting should not go beyond an hour or include a meal. He had to take place outside Washington D.C. and could not include others. In short, the Abe-Trump meeting must not look anything like a formal summit. Abe stuck to the deal, except that the encounter ran 90 minutes.

Obama, however, did not hide that he took offense. He turned down Tokyo’s request for separate summit talks on the sidelines of the APEC meeting in Peru on Nov. 26 four days after the meeting between Trump and Abe. Tokyo hurriedly arranged Abe’s visit to Pearl Harbor. It was an unexpected addition to Abe’s year-end schedule, but it was a cost the Japanese leader had to pay for 90 minutes with the unconventional U.S. president-elect.

A Tokyo source said Abe considered Trump a leader akin to unpredictable Russian President Vladimir Putin. He believed it was better to have a one-on-one with an unfathomable counterpart as soon as possible. There was also a business purpose to the meeting.

Around the time of the meeting last month, a controversial bill to allow casinos in Japan was pending in the parliament. Abe has been pushing hard for the bill to stimulate domestic demand. He would have pitched that there would be enormous business opportunities for the U.S. when Japan starts up its casino industry. Trump, as a businessman, would have been drawn to the idea.

Even if he cannot directly pitch his own resort business, he could cut out a deal with U.S. enterprises wishing to enter Japan by making them increase jobs and investment in the U.S., a promise Trump repeatedly made on the campaign trail. Trump was pleased with the meeting and wrote later on Facebook, “It was a pleasure to have Prime Minister Shinzo Abe stop by my home and begin a great friendship.”

Upon returning home, Abe’s party railroaded the bill, which had been debated for more than two years, through the Diet. More than 70 percent of the public opposes the plan.

Abe proved to be a skilled deal-maker by approaching Trump with a business idea he can easily relate to. Trump also read his Japanese counterpart well by picking him as the first foreign state leader to meet upon winning the election.

The power game is getting dizzy as players try to gain the upper hand on a new playing field. We, on the other hand, are forced to endure a bizarre drama of how much beauty care the president lavished on herself with taxpayers’ money.

The foreign media may have been impressed by our peaceful candlelight vigils, but who can help but mock Korea’s clueless politicians? The year 2016 has been a shameful one for us. Our hearts are heavy as the new year dawns because of the few options we have on the election of our next leader in 2017.