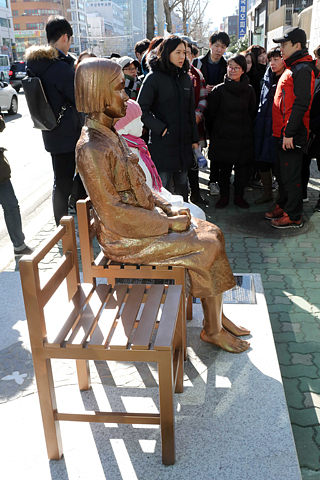 A monument to victims of Japan’s wartime sexual slavery was re-installed Friday near the back gate of the Japanese consulate in Busan after a district office gave in to mounting public criticism of its removal two days ago.

“The district office will not stop the civic group from installing the statue near the Japanese consulate if it wishes to do so” said Park Sam-seok, head of the Dong District Office in Busan, during a press conference on Friday morning. “At this point, whether or not to ban the installation of a comfort woman statue is not within the jurisdiction and power of a district office.”

After the Dong District Office Wednesday blocked a civic group’s attempt to install a bronze statue of a young girl in hanbok seated on a bench, similar to the Peace Monument across from the Japanese Embassy in central Seoul, complaints flooded in, paralyzing the civil complaint department.

“For two days all we did was receive calls,” an official of the civil complaint department at the Dong District Office told the Korea JoongAng Daily. “Most calls were about why the district office decided to remove the statue. We couldn’t get much work done.”

The civic group, the Committee of Youth for Erecting a Peace Monument, also known as Youth Make Peace, installed the statue near the back gate of the Japanese consulate in Busan in a surprise maneuver on Wednesday. The district office removed it within a few hours, saying it violated the Road Act by occupying a road without permission.

“I apologize to the people of Busan,” Park said, though he avoided taking responsibility for the controversial decision. “A department in charge removed the statue, and I wasn’t involved in the decision.”

Youth Make Peace re-installed the statue near the back gate of the Japanese consulate on Friday.

“Thank you everyone,” the group posted on its Facebook page. “The monument stands and the people have triumphed!”

“It will be there for good,” Kim Yoo-lan, a spokesperson for the civic group, told the Korea JoongAng Daily on Friday. “We will be doing some work on it today to fasten it to the ground.”

According to Kim, the 13 protesters who were rounded up by police after scuffling with them on Wednesday were all released by Thursday evening.

The initial attempt to erect the statue on Wednesday coincided with the one-year anniversary of the agreement between Seoul and Tokyo to resolve the issue of the Japanese military’s forced recruitment of women into sexual slavery during World War II on Dec. 28, 2015. The monument was financed by 8.5 million won ($7,060) in individual donations, including elementary school students pitching in their allowances.