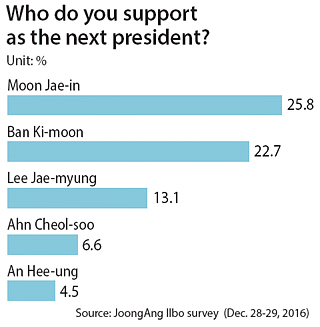 In a poll on likability conducted by the JoongAng Ilbo on Sept. 20 and 21, Ban scored 59.7 percent, surpassing all other potential presidential candidates. In a similar poll conducted Dec. 28 and 29 on 1,000 voters nationwide, his likability plummeted to 38.9 percent.

Last September, 36.4 percent of the respondents said they disliked Ban, which went up to 57.6 percent in the latest poll, a 21.2 percent increase. The December poll was conducted after the Seoul-based weekly magazine Sisa Journal reported allegations that he received money from Park Yeon-cha, chairman of Taekwang Industrial and a patron of the late President Roh Moo-hyun.

Ban was accused of receiving $200,000 in 2005 when he was foreign minister in the Roh administration and $30,000 in 2007 shortly after he became the secretary general of the United Nations.

In the latest poll, Ban recorded the highest likability among voters who are over 60 years old, 61.5 percent. Among regions of the country, Daegu and North Gyeongsang, the traditional stronghold of President Park Geun-hye and her Saenuri Party, showed the highest support for him, 55.3 percent.

Moon Jae-in, former chairman of the main opposition Minjoo Party of Korea, recorded the highest likability in the newest poll. His rating was 44.5 percent, down slightly from 47 percent last September, when he was ranked the second after Ban.

Moon’s main support was from voters in their 30s, as 66.7 percent of them said they like him. His popularity was conspicuously low among voters over 60 years old, at 18.7 percent. His likability was highest in Gwangju and North and South Jeolla provinces.

Separate from potential candidates’ likability, the JoongAng Ilbo asked poll participants who they support as the next president. In this poll, Ban’s rating went down 10 percentage point from the September survey to 22.7 percent, while Moon was ranked at the top with 25.8 percent. Moon’s rating went up by 8.5 percentage points from the September poll.

“The likability of Moon didn’t change much, but his support rate as a presidential candidate went up,” said Jeong Han-wool, a professor at Korea University’s Peace and Democracy Institute. “Traditional supporters of the opposition parties are uniting behind Moon because he has the highest chance of winning the election, which is expected to take place earlier than the scheduled December of this year.”

Seongnam Mayor Lee, famous for his straightforward criticism of President Park and demand for her impeachment in the early stages of the latest scandal, enjoyed a surge in likability. In the September poll, his likability was 16.9 percent, which went up to 35.7 percent in December. He was the third most liked politician among the 10 potential candidates in the poll.

His main supporters overlap with those of Moon: voters in their 30s, residents of the Gwangju and Jeolla regions, office workers and students.

The support rate for Lee as the next president also skyrocketed. He recorded 2.7 percent in September and 13.1 percent in December. In the latest poll, he beat Ahn Cheol-soo, former head of the People’s Party, who recorded 6.6 percent.

Ahn suffered a serious plunge in his likability, which went from 44.1 percent in September to 30 percent in the latest poll. Those who expressed a dislike of Ahn went up by 13.6 percent to 67.3 percent.

The JoongAng Ilbo’s poll also included simulations of the next presidential election and Moon was the frontrunner in key mock-up races. In a three-way race among Ban, Moon and Ahn, Moon won 41.8 percent, beating Ban by 7.2 percent and Ahn by 14.5 percent.

If Moon fails to win the Minjoo primary and does not run in the next election, 31.7 percent of his supporters said they will support Seongnam Mayor Lee instead.

If Ban does not run, 46.1 percent of his supporters said they are undecided on who to support.