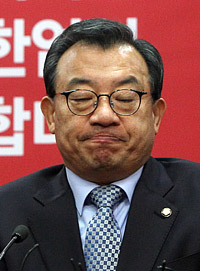 Former Saenuri Chairman Lee Jung-hyun announced his defection from the party on Monday, becoming the first pro-Park Geun-hye faction member to leave the party after the current party chief demanded those with close ties to the president desert en masse to restore public trust.

Lee’s office submitted the defection application to party headquarters on Monday, three days after Saenuri’s acting chief, In Myung-jin, told loyalists of the president to leave the party by Friday, saying that unless his demand was met, he would forsake his interim leadership.

“As a person who served as the party chairman, I decided I must take all responsibility by leaving the party,” said the three-term lawmaker. He expressed hope that the Saenuri will use his defection as “a stepping stone to forge unity from now on,” a remark seen as expressing hope that In will withdraw his demand for a defection by President Park’s core loyalists.

While In did not single out anyone, the targets of the purge were clearly the key members of the pro-Park faction: former Chairman Lee Jung-hyun; Rep. Choi Kyung-Hwan, who served as deputy prime minister for the economy; and Rep. Suh Chung-won, the so-called big brother of the Park loyalists.

Lee’s defection put an end to his 31-year membership in the conservative party, which began when he became an aide to a ruling party lawmaker under the dictatorial Chun Doo Hwan government. Lee became President Park’s trusted aide when he stood by her during the 2007 party primary race to elect the nominee of the Grand National Party, Saenuri’s predecessor, in which Park lost to former President Lee Myung-bak, whom Park succeeded six years later.

Having earned the trust of the president, Lee served as the senior presidential secretary for public relations. In 2014, Lee clinched a landmark victory by becoming the first conservative party candidate to win a district in Jeolla region, the traditional backbone of the opposition, in a by-election. He was re-elected in Suncheon, South Jeolla, in the general election last year.

While serving as Saenuri chief, Lee continued to show unwavering support for the president, drawing criticism that he was blindly supportive and was failing to present his political philosophy and vision for the county as the leader of the ruling party.

Lee’s defection came 18 days after he stepped down as party chief after Chung Woo-taik, a Park loyalist, was elected floor leader on Dec. 16, giving breathing room to the pro-Park members despite Park’s impeachment and the party’s fall in approval ratings.

The pro-Park group’s grip on party affairs led to a mass defection by Park adversaries, who are now preparing the launch of another conservative party on Jan. 24. The defection shrank the number of Saenuri lawmakers to 99 from 129.

While Lee forsook his party membership, it appears other core Park loyalists are resisting the pressure to leave the party. Rep. Hong Moon-jong, a four-term Park loyalist, reportedly likened In’s demand to the public trial seen in North Korea during a meeting with pro-Park members on Sunday. Choi Kyung-hwan also said he would “stay with Saenuri to the end.”