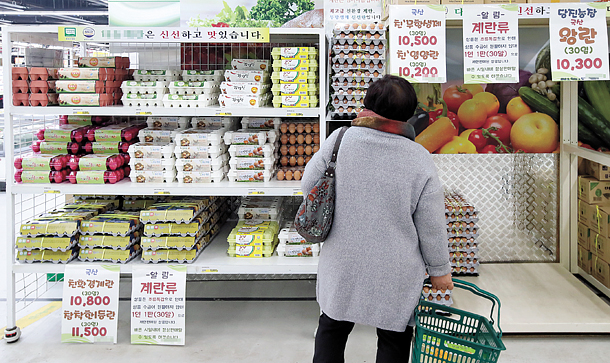 A shopper takes a look at the egg shelves in a grocery store in Songpa District in eastern Seoul on Tuesday. The signs say a tray of 30 eggs costs more than 10,000 won (8.30 dollar) and a customer is allowed to buy only one tray. [YONHAP]

The government will waive duties on imports of eight types of egg-related products, including fresh and powdered eggs, as the shortage in Korea is deepening after a widespread outbreak of avian influenza, which has led to the culling of nearly 30 million birds.

“The data showed that we had very few occasions of importing fresh eggs from abroad in the past and even though they were imported, they were not for the public to buy at stores, but rather they were for other reasons such as medical research purposes,” said an official at the Ministry of Strategy and Finance. “This will be the first time for the government to allow importing large volume of fresh eggs.”

The duty exemption will last until June. 30, the Finance Ministry said Tuesday. Currently, the import tariff on egg products ranges from 8 percent to 30 percent, but it will be suspended for six months.

“The government has decided to remove tariffs on eggs to deal with soaring prices and shortage of them in the country due to AI,” said Kim Young-noh, a director at the Finance Ministry.

The Finance Ministry said it will expedite inspections to have fresh eggs arrive as early as possible, or before the Lunar New Year holiday, when demand for eggs and poultry products tends to be higher.

A total of 98,000 tons of egg-related products can be imported without tariffs, and among them 35,000 tons, or about 700 million, will be fresh eggs. The 700 million eggs can meet Koreans’ daily consumption for about 20 days.

“About 30 percent of layer chickens are killed due to AI and the supply and demand problem will last at least six months from now [since the number of chickens for laying purposes needs to grow], said an official at the Agriculture Ministry.

The highest price reported to aT for a tray of 30 eggs was 9,700 won, which is 39 percent higher than the highest prices last month, which was when the shortage began after the country was hit by the virus on Nov. 16.

Meanwhile, the government also has decided to distribute 7,200 tons of reserve fishery products to stabilize the heated market ahead of the Lunar New Year.

The Ministry of Oceans and Fisheries said it will distribute its fishery products until Jan. 26 and local retailers, including traditional markets, will sell such goods 10 to 30 percent cheaper than retail prices.