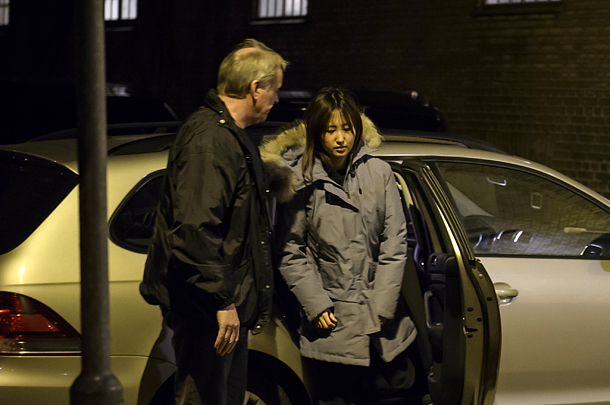 Chung Yoo-ra, the daughter of Choi Soon-sil, the confidante of disgraced President Park Geun-hye, in custody after her court hearing Monday, in Aalborg, Denmark. Korean authorities are understood to be working to get Chung Yoo-ra returned home in connection with an alleged corruption scandal. [AP/YONHAP]

Chung Yoo-ra, daughter of Choi Soon-sil, told reporters in Denmark that she has nothing to do with the corruption charges against her and that any controversy involving her was the result of her mother’s scheming.

“All I did was sign certain documents, whose contents were covered up by post-its,” Chung told a group of Korean reporters during a break in a detention hearing at a local court in Aalborg, a northern city of Denmark, on Tuesday. “I don’t know a thing about what’s been going on in my mother’s business, as it was run by her and her aides.”

Chung is accused of receiving unjust admission to and preferential treatment at Ewha Womans University. She is central to a probe into a corruption scandal involving the Korea Equestrian Federation and Samsung Electronics. Samsung pledged 22 billion won ($18.3 million) for Chung’s equestrian training. It was also the largest benefactor of two nonprofit foundations that Choi practically controlled, contributing 20.4 billion won.

“I thought I was going to be expelled [from Ewha Womans University],” Chung said. “But my mother and I met with then-President Choi Kyung-hee and professor Ryu Chul-kyun. I left the meeting before my mother did and then I found out later that I got the academic credits.

“I even told my mother that I wanted to drop out,” she added, “but it didn’t work out.”

Chung also denied knowledge of how Samsung came to finance her training.

“My mother told me that Samsung decided to sponsor six equestrian athletes,” Chung said. “I was just one of the six who were sponsored.

“I don’t know how much funding I received or from where,” she added. “Only my mother and my training coach would know.”
Chung denied having close ties with President Park Geun-hye.

“The last time I met her was when my father was still working [for Park],” she said. Chung Yoon-hoi, ex-husband to Choi, was chief of staff to Park from 1998 to 2004. “I think I was an elementary school student then.”

She also denied knowledge of what the president may have done during a mysterious seven-hour absence on the day of the Sewol ferry’s sinking in 2014, in which 304 passengers died after a delayed government response.

“I was pregnant at the time, and my mother and I had fallen out because of it,” she said. “I was living in Sillim-dong and my mother in Gangnam District [of southern Seoul], and we had no contact. So I have no knowledge of what might have happened in the government at the time.”

Chung was arrested by authorities in Denmark’s northern city of Aalborg on Sunday on the charge of illegally staying in the country. She was arrested with four other people, including her 2-year-old son.

The court in Aalborg on Tuesday extended Chung’s detention to Jan. 30, even after she told it, “There is no one to look after my 19-month-old son if I am detained.” Chung’s lawyer in Demark is reportedly planning to file an appeal.

Chung said after her arrest that she will not try to avoid extradition to Korea and will cooperate with an independent counsel’s probe of the allegations surrounding her and her mother – as long as she can be investigated without being detained.

Chung told the reporters in Aalborg that she would return to Korea in a heartbeat as long as she can stay with her son.

“It doesn’t matter if the child needs to stay at a nursery [when I’m being investigated], or with a social welfare group, or at a hospital,” she said. “I just miss my baby.”

If Chung returns to Korea, she will be separated from her son after she is arrested.

According to the Ministry of Justice, only children aged younger than 18 months are allowed to stay with their mother when the mothers are detained, as per the Administration and Treatment of Correctional Institution Inmates Act.

The National Policy Agency of Korea asked Interpol to issue a Red Notice for Chung to extradite her to Korea. The independent counsel issued an arrest warrant for Chung in December.

Interpol announced Tuesday that it decided not to issue a Red Notice for Chung, saying that the initial purpose for the notice, which was to arrest Chung and extend her detention, has been achieved.

Meanwhile, Korea’s Ministry of Foreign Affairs announced Tuesday that it ordered Chung to return her passport, and notified her that her passport will be annulled by Jan. 10 if she does not return it on her own accord by Jan. 9.

“The cancellation of her passport does not immediately make Chung an illegal alien in the country,” the ministry said in its official statement. “It is up to the Danish government to decide whether or not to expel her from the country.

“In the meanwhile, the ministry will speak with the Danish government and Interpol to make sure that Chung is not allowed to cross national borders,” it added. “A one-way travel certificate will be issued for Chung when she returns to Korea.”

The ministry added that it is cooperating with the Danish foreign ministry and justice ministry to extradite Chung.

“What’s most worrying is the fact that Chung does not have a place to stay if she returns to Korea,” said Lee Kyung-jae, Choi and Chung’s lawyer in Korea. “We also do not have a plan yet on what to do with the baby [while she is investigated].”