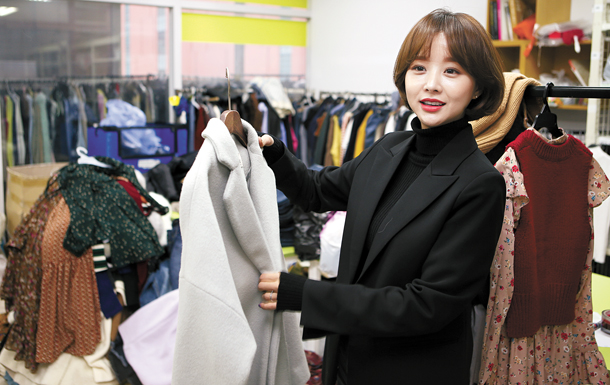 Im Ji-hyun, chief executive of Imvely, models all of the items on her site, including clothes, accessories and makeup. Annual sales on the online retail site have skyrocketed from 3 billion won (2.5 million dollar) in 2013 to 48 billion won in 2015. [KIM CHOON-SIK]

In the world of online retailers, 10,000 pieces is the standard of a “hit” product. But on Imvely, the popular online site for women’s wear, merchandise moves fast. The site has sold 200,000 pair of jeans decorated with Italian fabric polish.

The Aura Glow Cushion foundation unveiled last month sold out in the first five days. A winter jumper with fur attached inside sold out in eight minutes after its uploading and even spurred re-sellers online.

Imvely’s fifth brick-and-mortar shop at Lotte Department Store in Daegu had a 300-meter-long (984-foot) queue on its opening day in September. The retailer’s annual sales, which were around 3 billion won ($2.5 million) in 2013, jumped 16 times in 2015 to 48 billion won.

Last year, it raised more than 70 billion won. The company started with three employees, but now, has about 250. 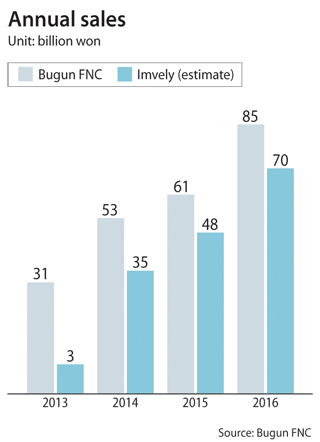 The JoongAng Ilbo spoke with Imvely CEO Im Ji-hyun. She is also the wife of Park Jun-sung, chief executive officer of Imvely’s parent company Bugun FNC and owner of one of the most successful men’s online retailers, Mutnam.

They both came up with Imvely’s name, a compound of her surname and the adjective lovely.

The journey started in 2013 when Im, then Park’s girlfriend, posed in front of a camera for the first time after a model bailed out of a photo shoot for Park’s women’s shopping site with no notice.

Im still models for all items updated on Imvely, including clothes, accessories and makeup.

“The cycle for fashion trends is shorter than ever,” she said. “Apparel retailers like Zara release new items every two weeks, while for Imvely, the cycle is one week.”

Her constant ideas for product updates come from her followers’ immediate responses on Instagram and Facebook, where she uploads photos of her wearing products even before they are listed for sale.

Her Instagram account has 541,000 followers and each of her posts has thousands of comments below. That feedback was the drive and inspiration for Imvely’s special features, such as releasing two versions of the same clothing at different lengths.

Im got the idea from one comment on a dress that said it was too short for the customer’s tall height.

As most products sold at Imvely are made by the company through original equipment or design manufacturing, customers frequently place pre-orders to ensure they get the products before running out.

Every week, about 100 new items are uploaded to Imvely. Each posting for an item has at least 10 images of Im wearing it in everyday life. Park takes all of the photos. The number of clothing items they’ve shot together in the last three years reaches 6,770.

For every cosmetic she sells, Im uses prototypes for at least a year to find points for improvement and upgrades before final release. Her first product was lipsticks featured in four colors. She sold 20,000 tubes in only three days.

This year, Imvely unveiled Vely Home, which carries household goods like aprons and dishes. “Our plan is to collaborate with new designers and characters for the design,” Im said.

Bugun FNC has started expansion into China and signed a partnership deal with local company Bosideng Group in May.