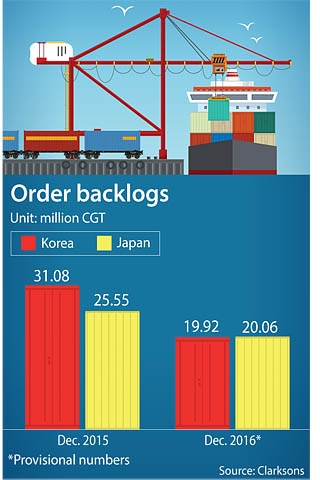 After a tough year of order droughts, Korean shipbuilders have been overtaken by Japanese competitors in terms of order backlogs for the first time in 17 years.

The amount of orders that Korean shipbuilders had yet to complete through the end of last year totaled 19.92 million compensated gross tonnage, while Japan recorded 20.06 million CGT, according to interim results from shipbuilding market research company Clarksons on Wednesday.

While the numbers may change, these preliminary results show Japanese shipbuilders are 140,000 CGT ahead of their Korean counterparts. Since 1999, when Korea beat Japan by roughly 21,000 CGT, Korea had kept its pace ahead of Japan.

The shipbuilding industry is suffering from the residual effect of a downturn in the shipping industry that resulted in the bankruptcy of Korea’s largest container line, Hanjin Shipping, last year. The blow cut the need for new ships, dragging down business for the world’s shipbuilders.

As a result, Korean shipbuilders have stepped down to third. China, at the top, has secured roughly 30 million CGT. Fewer backlogs mean shipbuilders may have to face empty dockyards soon lest they ink new orders. The nation’s shipbuilders are now vying for more orders
this year, while still maintaining tight restructuring measures to keep their businesses lean.

“There is nothing more important than survival,” said Park Dae-young, CEO of Samsung Heavy Industries, during his New Year’s address. “We have to continue with our business turnaround plans this year catering to our proposed restructuring plans and market conditions.”

“Orders for general merchant ships are due to remain sluggish for the time being, which means competition between companies to secure orders will become fiercer,” said Jung Sung-leep, CEO of Daewoo Shipbuilding and Marine Engineering, during his New Year’s speech.

“The tasks that we have not completely figured last year, such as inking more orders, securing liquidity and improving margins, remain our homework for this year.”

Hyundai Heavy Industries and Hyundai Mipo Dockyard each put out a sales guidance of 15 trillion won and 2.3 trillion won for this year on Tuesday, reflecting the risk of prolonged order shortages. “The projected sales are down 24 percent and 34 percent from our estimated
figures for 2016 results,” said Han Young-soo, an analyst at Samsung Securities. “This suggests the firms believe the sales decline in 2017, which had been widely expected due to thinning backlogs, will be faster than market expectations.”

In 2008, when the shipbuilding industry was experiencing good business, Korean shipbuilders had secured over 70 million CGT of order backlogs, widening the gap against Japanese rivals by 31.6 million CGT.