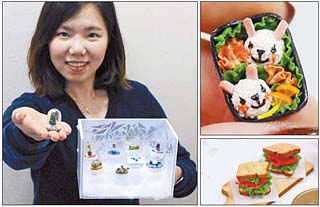 A miniature chocolate cake, sandwich and a character lunch box made by Jeong Ji-hwa. [JEONG JI-HWA]

Jeong Ji-hwa creates tantalizing, freshly baked chocolate cakes, stuffed sandwiches and richly spiced shish kebabs, none of which can be eaten for they are all 1:12 scale clay models.

Jeong, 24, manages the YouTube channel Dalchi, (short for Dalyeora Chicken, or Run Chicken), which she started in July 2014, where she posts videos showing how she crafts her miniatures. She has around two hundred videos with over 110 million total views, and her channel recently surpassed 60,000 subscribers.

“I can craft to near 100 percent accuracy almost anything around me,” says Jeong. “The process of crafting miniatures isn’t too different from making the actual thing. On top of the clay pizza dough, you place the clay toppings. For a cutting board, you draw up the plans and after cutting the wood, you sand it down.”

The creation of miniature food models began in Japan before World War II and recently became a viral sensation there in December 2014 with the debut of the Youtube channel Miniature Space, created by Japanese users, which now has over 1 million subscribers. Its most popular video, in which strawberry shortcake is made from a single strawberry, has almost 9 million views.

Jeong’s work is quite possibly the inspiration for Miniature Space and the origin of the miniature mania that subsequently swept Japan, as it debuted on YouTube five months before.

After majoring in cosmetology, she worked as a manicurist and as an administrative staff member at a traditional Korean medicine clinic. But having to deal with people caused her stress, and that’s when she began creating hand-crafted miniatures.

“It’s so fun and I didn’t have any distracting thoughts,” says Jeong. “Looking at the finished product, my sense of accomplishment was huge.”

She started with simple things, then progressed and eventually uploaded the self-shot and edited videos to Youtube.

“The number of subscribers rapidly increased,” she says.

Jeong quit her job and contracted with CJ E&M’s DIA TV to become a full-time YouTube content creator. She drew up plans to convert her room into a studio and has now made about a hundred miniatures. In addition to clay, she uses a variety of other materials such as paper boxes and fabric.

“There are requisite tools for shaping clay,” says Jeong. “But instead of a needle-point clay tool, one can use a toothpick, an everyday object.”

Depending on the project at hand, the process can take anywhere from a few hours to several days. Jeong meticulously observes objects around her, compares a selection of photographs and captures any distinguishing features they may have.

Her elementary and middle school fans occasionally ask for autographs and she receives fan letters too. She makes an income through advertisements and sponsorships her conglomerate friends would envy.

“After starting this work I became more confident, rather, after interacting with other people, my personality has become more outgoing,” said Jeong. She is also in the middle of planning a live-stream on YouTube. She will show the process of crafting miniatures in real-time, after which she will correspond with the viewers crafting concurrently with her through the YouTube comments section. “My dream is to one day teach children how to craft miniatures in a studio packed-full of miniatures I created,” said Jeong.