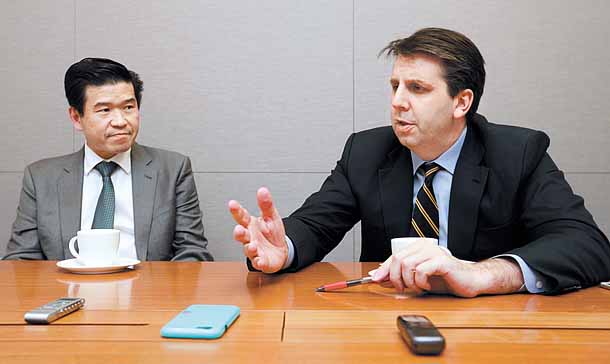 Deflecting concerns about change in relations between Korea and the United States in the Donald J. Trump administration, Washington’s ambassador to Seoul said the historic relationship can handle evolution.

“I wouldn’t want to take away decisions based on the president-elect … but the good news is the relationship between the U.S. and Korea is as strong as it has ever been so there is a foundation on which to develop,” said ambassador Mark Lippert on Friday in a joint interview with James Kim, chairman of American Chamber of Commerce in Korea (Amcham), at the chamber’s office in Yeouido, southwestern Seoul.

Lippert cited energy and infrastructure development, cyber business and security as areas Korea and the U.S. can strengthen cooperation on.

“Trade Minister Joo Hyung-hwan identified a few [areas], energy and infrastructure development are new areas where we can work together, I still put a lot of emphasis on cyber and then obviously space,” Lippert said. “I also think that there is real opportunity to work on some of the regulatory reforms, the business environment and the joint investment climate on both sides of the Pacific.”

Kim, CEO of GM Korea, who was re-elected to his fourth year as chair for Amcham this year, also expressed confidence in a positive relationship between Korea and U.S.

“Donald Trump is a businessperson and I personally believe that pragmatism will prevail,” Kim said. “I really believe in a win-win scenario.”

Trump criticized the free trade agreement between Korea and U.S. during his election campaign, calling it a “job-killing” deal.

“I’m not going to pre-judge or get into the decisions of the president-elect, but the bottom line is that [there has been] positive benefits for both sides from the KORUS FTA,” Lippert said. “You look at U.S. investment in Korea, that number is very high, look at our trade volume that’s gone up over time, and service sector trade has been incredibly beneficial for the U.S.”

The next chapter of the relationship, though, must focus on enhancing the business environment in Korea, Lippert pointed out.

“Many of the sectors that we hoped to unlock for very fullsome growth under the KORUS FTA are not doing as well as they should because of some parts of the business environment,” Lippert added. “The next phase in this economic relationship needs to be focused on the business side here: Fair, predictable, transparent regulatory reform, creating a better investment climate.”

Amcham, which has 800 U.S. companies as members, plans to encourage environmental changes that are needed in the country as a “bridge between the U.S. and Korea” in 2017.

Kim said Amcham will strive to make a business environment “where a lot more global standards are in place so that American CEOs operating here have the confidence to say Korea is the best place to do business.”

Lippert also touched on recent economic and political crises in the country. “Koreans have such a strong will, they are such intelligent people, thoughtful and articulate, that they will find a way to figure it out.

“And I can’t tell you how many times I have been asked the question, ‘How did the Koreans do that? We want to know what their secret is.’ So remember that you are in a good place to have experienced over the last 30, 40 years the most spectacular economic and political development story in the history of the entire world and the world admires you for it.”