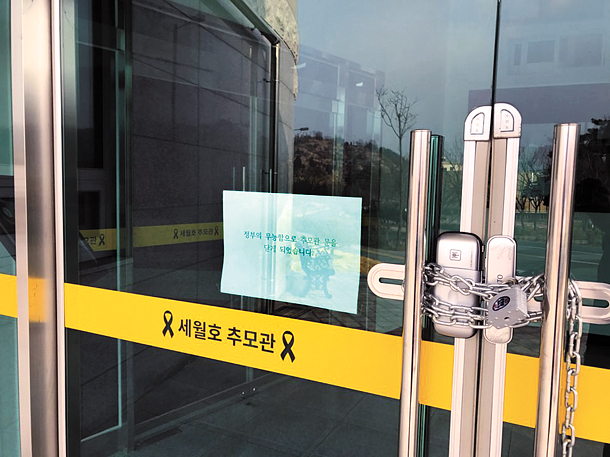 Monday marked 1,000 days since the Sewol ferry tragedy. When I visited the Sewol Ferry Victims Memorial Hall in Incheon the day before, the entrance was locked and contained a notice: “Due to the government’s incompetency, the memorial hall has been shut down.”

The hall was closed on Jan. 1. The lock and chain was placed by a committee representing Sewol ferry victims’ families, which explained that the space could not continue operating due to lack of funding. When the closure was known, the city of Incheon provided staffing and reopened it on Monday.

The memorial hall honors the 45 Sewol ferry victims who were not with the Danwon High School group. The two-story building opened last April but was closed just one month later due to lack of funding. It reopened in October after receiving more money.

But since the funding for operations was not included in the government’s budget, the families of the victims decided to close the memorial hall in protest against the government.

The Ministry of Oceans and Fisheries explained that government money had not been allocated because the April 16 Foundation that oversees Sewol memorial projects (following a special legislative act) had not been established yet. The ministry plans to provide funding first from its disaster relief budget. The 190 million won ($160,000) needed to operate the memorial hall is to be provided in late January or early February.

Nationwide attention to the 2014 Sewol ferry incident had somewhat subsided, but the recent Choi Soon-sil scandal has renewed interest in the tragedy. Questions have been raised about President Park Geun-hye’s whereabouts in the seven hours after the ferry sank.

People paid their respects to mark 1,000 days since the tragedy. A memorial hall in Ansan, Gyeonggi, had 100 to 400 visitors on a daily basis. The Classroom of Memories in Ansan’s Office of Education had 40 to 50 visitors every day, and another 200 to 500 people visited the memorial hall in Paengmok Port in Jindo County, South Jeolla.

Kwon Oh-bok, who lost his brother and nephew on the Sewol, is still staying in Paengmok Port as their bodies have not been recovered. “The visitors subsided for a while, but after the Choi Soon-sil scandal emerged in October, more and more people come here to mourn the victims.”

A representative of the Sewol victims’ families said that 10 million signatures helped pass a special legislative act addressing the incident, and they eventually became the driving force of the 10 million protesters demanding President Park step down. He called for continued attention and support for the investigation and salvage mission.

A thousand days have passed since the ferry’s tragic sinking. It is time to ruminate over the meaning of the yellow ribbons representing the Sewol tragedy and our pledge to “never forget.”


*The author is a national news reporter for the JoongAng Ilbo.