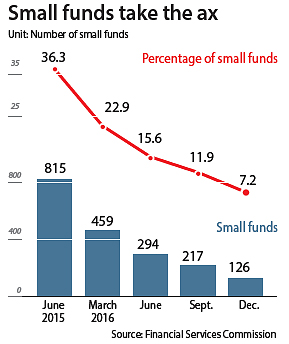 The government is ordering asset management companies to reduce the number of public mutual funds containing 5 billion won ($4 million) or less to protect investors who might suffer losses because firms rarely manage such small funds properly.

These small funds currently account for about 10 percent of all public mutual funds managed by asset management firms. The Financial Services Commission, the country’s financial regulator, is encouraging companies to halve the number to 5 percent.

The regulatory agency said firms that fail to comply will face several restrictions, including limits on investment in new funds.

“Asset management firms have only been collecting commission from investors subscribing to such small funds and hardly give any interest in managing them,” a Financial Services Commission official said Wednesday. “As such funds have been ineffectively managed, it could result in investment losses. Our goal is to move away from such practices.”

The number of small funds has been rapidly shrinking ever since the government vowed last year to reduce the number of small funds. As of the end of 2016, there are 125 funds with 5 billion won or less, down 84 percent from the first half of 2015. They now account for 7.2 percent of all public mutual funds, down from 36.3 percent reported during the first half of 2015.

Among the country’s 53 asset management firms, only 23 of them, or 43 percent, have been able to reduce the portion of small funds to 5 percent.

Nine companies including Mirae Asset, Samsung, Shinhan BNP Paribas and Deutsche were able to get from 19 percent in the first quarter of last year to 5 percent by the end of the year. Hana UBS shed the most, 83 funds, followed by Mirae Asset with 62 and Samsung with 57.

Ten other asset management companies didn’t have any public mutual funds with 5 billion won or less, including KTB, Heungkuk and Hyundai.

Of the 30 asset management firms that have yet to achieve the 5 percent target, 18 have been banned from registering new funds.

The Financial Services Commission said the reduction will help asset management firms win investor trust with more efficient management. “We will continue to encourage asset management companies to lower the number of small funds until February 2018,” the commission official said.