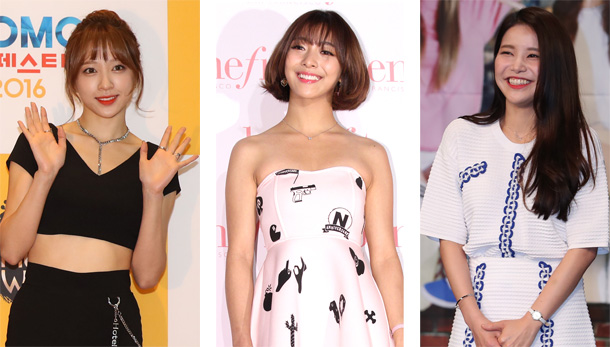 Girl group members Hani of EXID, Luna of f(x), and Solar from Mamamoo are teaming up to release a collaboration produced by the brains behind last year’s “Dream” sung by Suzy and Baekhyun.

Mystic Entertainment confirmed on Wednesday the collaboration of the popular singers, which will be unveiled sometime this month. The song is a fast-tempo dance track, which has already been recorded and the music video completed.

The company described the song as being released as part of producer Park Geun-tae’s girl group project. The producer has been keeping busy since last year with his music project, releasing brand new singles and remakes sung by popular singers. The aforementioned “Dream” was released last January and dominated the charts. He later produced a remake of R&B group Brown Eyed Soul’s hit song “Did We Really Love” for American singer-songwriter Eric Benet, which was released the next month.

The upcoming collaboration features vocalists known for their superb singing abilities. While Solar and Luna are the main vocalists from their respective groups, Hani recently made headlines with her unexpectedly impressive singing skills on a recent airing of MBC music program “King of Mask Singer.”