Lessons learned from a life lived to its fullest : Park Hye-ran reflects on fears of aging and death in latest book

Lessons learned from a life lived to its fullest : Park Hye-ran reflects on fears of aging and death in latest book 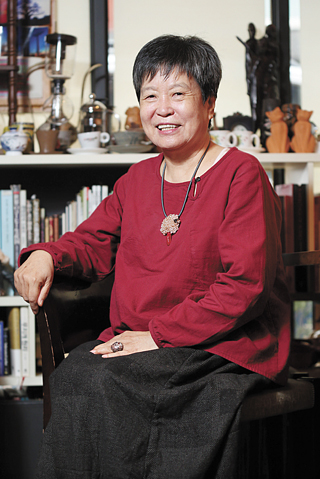 Park Hye-ran, also known as the mother of singer Lee Juck, gives advice on how to cope with the stress of aging. [KIM KYUNG-BIN]

Singer Lee Juck, 42, is a so-called eomchina, which loosely translates as “my mom’s friend’s son,” meaning someone who is good at everything. Lee has not only been acknowledged by the public for his singing abilities for over 20 years, but also graduated from Seoul National University (SNU), one of the most prestigious schools in the nation.

Lee isn’t the only child in the family that made their way to the famed school. His two brothers were also accepted into SNU without receiving any private lessons. Due to her experience sending all three of her sons to the renowned university with not much stress, women’s studies scholar Park Hye-ran, Lee’s mother, has become a famous mentor.

Park became even more well known when she introduced her book of essays “About Aging” at age 59, calming aging women by sharing her personal stories. Four years later, she released the second book in the series, “Again, About Aging.”

Now 70, Park recently released her latest book, “Today, the First Day I Live,” which is the third in the “aging” series.

The book’s first page reads “At last, I became old.” Through her essays Park talks of how one should deal with the fears of aging and death. It shows readers that aging is not a bad thing through her witty stories. Her positive outlook showed itself even during an interview with the JoongAng Sunday, an affiliate of the Korea JoongAng Daily.

“Now that I look back to my past life, I can’t think of any other time that was better than right now,” said Park. “I don’t have to save up to get my own house, struggle to raise my children, or worry about my husband’s work. I also don’t have anything to spend large amounts of money on. All that’s on my mind is not to be sick for the rest of my life and die in peace.” 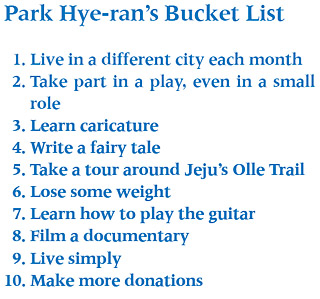 Even though Park’s books are centered on aging, the main readership for “About Aging” surprisingly consisted mostly of women in their 30s. This probably signals that her books work as guides for the younger generation as well.

“Time can certainly teach us a lot of things,” said Park.

The author also shared her views about the life of aging men.

“My husband got really sensitive right after his retirement,” said Park. “He would raise his voice or get sulky for the pettiest reasons. I almost understood why a substantial number of older couples end up getting divorced.

“Many people think that men indulge themselves in more power than women. But in reality, because of this common thought, men are put under much pressure. Men think that they should be stronger than women, but this only suppresses them more. A lot of men go through inner conflicts after retirement, feeling that they have lost power. This is why couples need more and more love as they age.”

One of Park’s other tips for men was to increase communication with their children.

“Maybe people in the past thought that child-rearing was a woman’s duty. But this only makes fathers lonely as there’s not much communication with their children.”

What makes Park’s most recent book different from the two others is that it mentions death more frequently.

She said, “I don’t think it’ll be easy for me to get over the feelings I had when I heard that my friend had died. I realized that I shouldn’t take what’s around me for granted. Death isn’t far away from us. We need to love as hard as we can. My friends and families are disappearing one by one.” 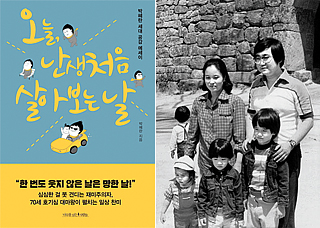 Left: Park Hye-ran’s recent book of essays “Today, the First Day I Live,” is the third book in Park’s so-called aging series. Right: A photo of Park and her family during her younger days. In the middle is singer Lee Juck.

These days, a lot of people around Park’s age talk about “how to die well.” It is many people’s wish to pass away in their sleep with no pain. There’s this saying that it’s always a lie when old people say they want to die, but Park doesn’t think so.

“If one thinks that their life ahead is going to be full of pain and meaningless, they should feel free to think that they want to die,” said Park. “I personally think that euthanasia has its own purpose. Why should one cling on to life when they feel that there’s no meaning in it? It’s simply dreadful to imagine myself being kept alive by machines in the intensive care unit. Parents should tell their children about those things when they have the time.”

When Park was in her 20s and 30s, people told her that she would live her later years in much comfort with her three sons. But it is uncommon for young people to look after their parents nowadays.

“The world changed way too rapidly. Had it been a bit steadier, we would’ve been able to prepare ourselves, but all of the sudden, human life span lengthened and life became tougher for the youth. A lot of old people are thinking ‘How am I supposed to carry on with my life when I don’t have anything left?’ With the advent of longevity, old people became a headache for young people.”

With practically nothing but empty days left ahead, it is understandable to run into older people who are unhappy with modern society. But Park advises that complaining won’t help. She says that the key to overcome this bleak situation is to love oneself.

“A lot of people in my generation grumble about the youth of nowadays,” said Park. “They call young people weak, reminiscing the past when they suffered through difficult times. But the older generation would have done the same if they were put in that situation. We didn’t stand strong to our own will; it was the atmosphere that led us to do that.

“After all, young people have never been old, but we’ve all been young once. The only choice we have is to love ourselves, no matter what society thinks of us.”

As she ages, Park feels as though she’s growing more and more broadminded and forgiving.

“When I was young, it felt like the world was covered in bright colors, but they changed to pastel colors as time went by. Now it’s beginning to change into a black-and-white world.

“But amid those black-and-white days arrives a moment when the world turns bright again. It touches my heart when my grandchildren run to me or when I meet someone very kind.”