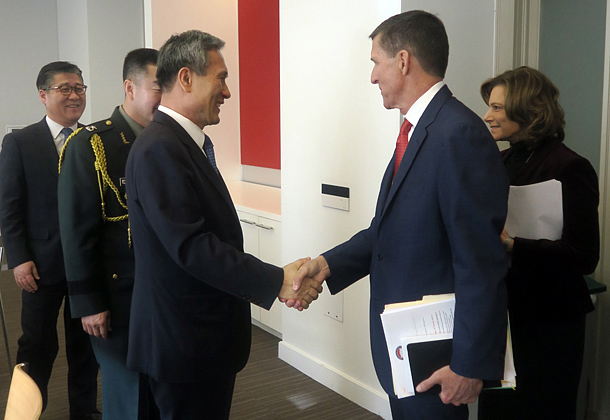 Kim and retired Lieutenant Flynn, who previously headed the Defense Intelligence Agency, held an hour-long meeting Monday in Washington amid uncertainty over what direction President-elect Donald J. Trump will take in policy about Korean Peninsula issues and China, as well as a leadership vacuum in Seoul.

Flynn, the son of a Korean War veteran, also pledged to strengthen the Korea and U.S. alliance, describing the cooperation between the two countries as a “sticky rice cake,” according to Kim.

A relationship compared to a sticky rice cake, or chalddeok in Korean, is a perfect match.

Following the impeachment of President Park Geun-hye last month, Korea was plunged into a leadership vacuum especially in regard to foreign affairs, and opposition lawmakers Wednesday criticized Kim for exceeding his authority by taking sides with Washington over the Thaad issue.

Opposition People’s Party Floor Leader Rep. Joo Seung-yong, said, “While it is good to be talking with the new Trump administration, it is desirable for our next administration to look into relations with the United States and China comprehensively before making decisions. There is a need to understand further if Thaad is the optimum weapon to defend Korea.”

This decision to deploy the Thaad system in Korea, which had been a hot potato issue in Seoul for years, is leading to increasing friction with Beijing. China has been levying unofficial sanctions on Korea, affecting tourism, the entertainment and cosmetics industries and in the military sphere as well. Beijing sent 10 military aircraft including strategic bombers into Korea’s air defense identification zone (ADIZ) on Monday.

Lu Kang, a Chinese Foreign Ministry spokesman, responded Wednesday to Kim’s remarks by warning, “There can be huge damage to Korea and Chinese relations” should Korea continue not ignore its opposition to the deployment of Thaad.