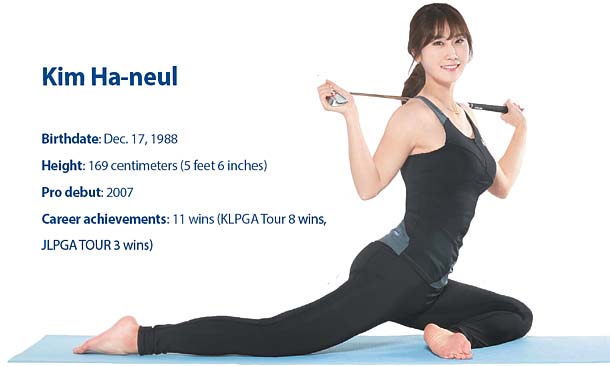 Kim Ha-neul, female professional golfer, started her new year with Pilates. The year 2016 had been a busy one for Kim, having won twice in the Japanese Ladies Professional Golf Association (JLPGA) Tours and just returned home in late December.

The end of the season doesn’t mean a time for long naps on the couch, however. For Kim, her holidays mean a rest from golf, not from working out. “I’ve been doing Pilates for eight years now. I feel sorry to my body when I don’t work out for a day, even when I’m taking a rest [from golf],” said Kim. Pilates, developed by the German gymnast Joseph Pilates, focuses on breathing, core strength, controlled movements and alignment.

Ever since her debut in 2007, Kim has been in constant action for 10 years non-stop. For her efforts, she has won eight times in the Korean Ladies Professional Golf Association Tours. In 2011, she even won awards for the most number of wins, most prize money won and the MVP award. Kim won in one of the tournaments in the JLPGA Tour in the first year of her debut in Japan, 2015, and two in 2016.

Kim Ha-neul, a professional female golfer, thanks Pilates for her health and lack of major injuries. [LEE JAE-JOON]

Kim says the secret to her numerous victories, without incurring any major injuries, lies in her restless and exhausting workouts.

“I have to compete in about 30 tournaments every season, and a healthy body has to back me up,” she said. “The Pilates that I do is very different from ordinary routines. Just a casual Pilates session doesn’t have any actual effects, so my workouts are longer and harder. Sometimes, it’s so exhausting that I’m knocked out in just an hour. I even scream sometimes. But the level of fitness I need doesn’t come unless I overcome those hardships.”

Kim described herself as a “tough cookie” when it comes to her athletic career, though she says she’s a completely different person off the green, the kind person who cries easily and doesn’t know how to reject requests from others. But when it comes working out, that’s a different story.

“If someone beats me because she’s better, then tough luck. But I can’t bear with losing to myself,” said Kim. “I’ve never given up on training or practice because of this.”

Kim, considered very fit even among golfers, likes to wear mini skirts to flaunt her muscular legs, but for a practical reason, too. “My arms and legs are thicker than most women because of my workouts and trousers don’t fit me well, so I prefer wearing skirts,” said Kim. “It’s not that I don’t want slim limbs. But I have to give them up as long as I’m an athlete.”

Kim also leads a very professional lifestyle in terms of her everyday habits. She doesn’t drink alcohol, carbonated beverages or coffee. “I don’t avoid them because they’re unhealthy,” she explained. “I just never really liked them. In that sense, I’m blessed as an athlete.”

This year, which marks the 11th since her debut in the professional tours, Kim turns 29. “I went to Japan because I was fed up with people calling me a veteran,” said Kim. “In the Japanese Tours, I’m average age.”

She added, “I was able to make constant progress because I’ve had no major injuries in 10 years. Especially in 2016, I finished all the tournaments without giving up any of them because of all the physical training. My shots were good because my health was generally good. I even set myself a new record with three hole-in-ones in a single season. This year will be the same. Physical training is really important when I’m up against younger competition.”

When asked to give herself a score out of 10, Kim gave herself an eight for last year’s performance. The two victories won her the fourth highest cash prize with 123 million yen ($1 million), but finishing in second place in four tournaments came as a disappointment. But the dissatisfaction has actually motivated Kim for this year.

“Thanks to training so hard my palms were chipped last winter, the results came out good last year,” she said. “This year I aim for three or more victories. I will try even harder than last year.”

Kim awaits an off-season training in Vietnam in mid January. “As important as it is to show a good performance, it’s crucial that I finish the season in good shape. Just as I’ve done for the last ten years, I plan to get through the next season without injury.”