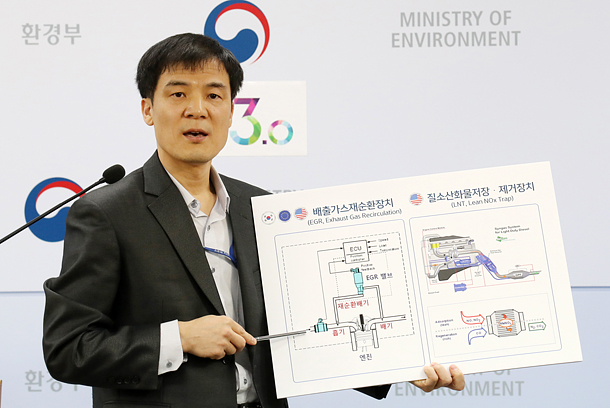 The Ministry of Environment accepted Audi Volkswagen Korea’s recall plan on Thursday, one year after it said the automaker cheated on emission tests for 15 models.

Volkswagen’s first recall plans were declined in June as the company didn’t acknowledge that it fabricated test results. Four months later, it filed another plan admitting it used illegal software that downsized emissions for its cars.

According to the approved recall plan, Volkswagen Korea will undergo a free software upgrade, which takes less than 30 minutes. For customers of the problematic models, it will provide a 1 million won ($848) coupon, transportation fees, pickup and delivery service, along with operating a call center. Recalls will start Feb. 6. “The goal is a recall rate of 85 percent,” said a ministry spokesman.

This is opposed to what domestic consumers have been requesting so far, to push VW to grant product exchanges instead of simple recalls of system upgrades. The Environment Ministry said in Thursday’s statement that the measure was unplanned unless the recalls prove to be ineffective for solving the technical problem.

Law firm Barun, which is handling class-action civil lawsuits against Volkswagen, opposed Thursday’s acceptance of the recall plan through a statement on Thursday, pointing out that the investigation was not conducted thoroughly in terms of methods and tools used for the test. “The victims will submit a lawsuit today to request annulment of the approval,” attorney Ha Jong-sun said.

Meanwhile, seven Volkswagen employees and one agent for certification processes were indicted by Seoul prosecutors on Wednesday as the result of a 11-month probe into the company for forging test results and importing models that did not meet emission standards under the Clean Air Conservation Act.

Three among the list are senior executives of Audi Volkswagen Korea: Chairman Johannes Thammer, his predecessor Trevor Hill and CEO Park Dong-hoon. The latter two were heading the company when the problematic 15 models were imported from mid-2011 to mid-2013. “We found circumstantial evidence that they turned a blind eye on the matter despite having enough room for suspicion,” the prosecutor’s office said in an official statement.

“As the suit is still ongoing, we can’t give out details - all we can say is that the company is willing to actively cooperate in the remaining legal process,” said a spokesman for Volkswagen Korea. “Recall plans for the remaining 13 are already under discussion.”

Another barrier for Volkswagen Korea is restarting sales for 34 recent models whose certifications were revoked in August for falsifying papers in emissions and noise tests. This dealt a critical blow to the German car brand as the models were almost all of what it sold in Korea.

While the 15 that used illegal software were old models whose sales had ended by late 2015, the 34 were imported later and many of them were still on sale at Volkswagen dealers. VW can restart sales after the vehicles are recertified by the government, a process that has become longer and stricter since the scandal.

On the other hand, Volkswagen’s smaller compensation for Korean consumers caused controversy among the local public. Last year, the company offered a one million won worth gift coupon usable for repairs or auto accessories. But this only fueled further outrage as the amount was far from being close to the money Volkswagen settled over in the U.S. and Canada, which are a maximum of $10,000 and 5,950 Canadian dollars per person.