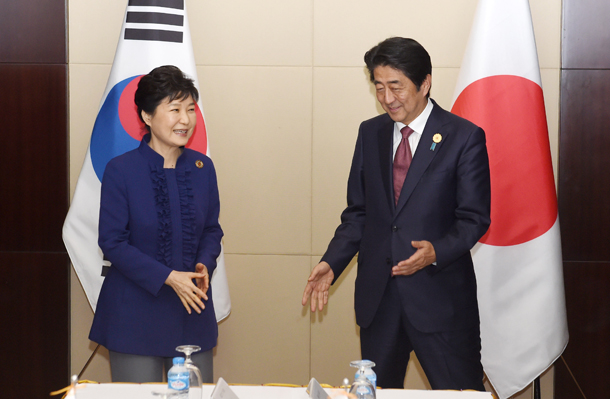 Arrived at the Liberal Democratic Party headquarters at 9:31 a.m. Party executives’ meeting at 9:32 a.m. Arrived at the prime minister’s residence at 10:01 a.m. Cabinet meeting at 10:04 a.m. Meeting with Ambassador to Korea Yasumasa Nagamine, Consul General in Busan Yasuhiro Morimoto and Deputy Foreign Minister Shinsuke Sugiyama at 10:20 a.m. The group left at 10:50 a.m. … Luncheon with Japanese-speaking ambassadors, including Korean Ambassador Lee Joon-gyu, at 11:40 a.m. … Meeting with National Security Agency Director Shotaro Yachi at 2:24 p.m. … Interview with Kyodo News Agency at 3:39 p.m. Dinner with Sadayuki Sakakibara, head of the Japan Business Federation, and others at Senbazuru at 6:43 p.m. Return to residence at 9:06 p.m.

This is how Japanese Prime Minister Shinzo Abe spent a day on Jan. 10, a day after the Japanese ambassador in Seoul and consul general in Busan were recalled to Japan over the installation of the “comfort woman” statue. Japanese newspapers reported more than 20 items of Abe’s schedule minute by minute on Jan. 11. It was not a special day. The schedule of the prime minister has always been disclosed in the next day’s paper since the 1970s.

“Based on when and how long the prime minister spoke with someone, it is possible to guess whom he is close to and whether a policy decision is about to be made,” an article on Japanese Wikipedia explains. “There are few countries where the schedule of a prime minister is released in detail like in Japan.”

The Japanese media is known for its aggressive reporting. The prime minister’s day is based on information collected by the correspondents covering his office. But it is not easy to confirm specific schedules without cooperation from the office. Aside from a few confidential meetings, the prime minister should have a sense of public service to be under the watch of citizens 24 hours a day.

Currently, Japanese reporters stay in the first-floor lobby of the prime minister’s residence and ask questions whenever he comes in and out.

Before, they used to camp out in the hallway in front of his office. So in the past, papers used to report not only the schedule but conversations between the prime minister and reporters. If this were the case in Korea, the president would be talking to reporters in front of her office on the second floor of the Blue House.

If Korean reporters were allowed to cover the president so closely, would Park have avoided her office all day during the Sewol ferry tragedy?

She would have to put up with newspaper reports saying, “Stayed in the residence all day until hairdressers visited at 3:22 p.m. and left at 4:37 p.m. Visited the Central Disaster and Safety Countermeasures Headquarters at 5:15 p.m. After that, Park remained in her residence [according to the schedule of the day as the Blue House claims].”


*The author is the deputy political news editor of the JoongAng Ilbo.