On first day back home, Ban acts like candidate

On first day back home, Ban acts like candidate 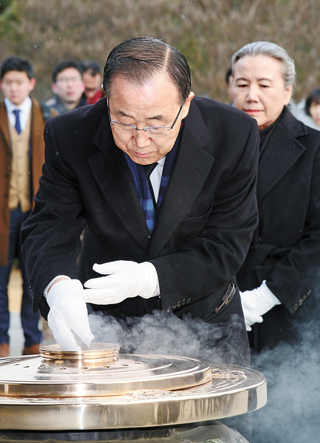 Ban Ki-moon spent his first day back in Korea talking and acting like a presidential candidate, although he hasn’t officially announced he will run.

He paid respects at the tombs of the late presidents Syngman Rhee, Park Chung-hee, Kim Dae-jung and Kim Young-sam, along with those of Korean patriots and war veterans amid a light snowfall.

“I have returned home after having striven for world peace, human rights and development over the past 10 years as the UN secretary general,” Ban wrote in the cemetery’s visitor’s log. “I will try my best, though my capacity may be limited, to enable the Republic of Korea to make a greater leap forward.”

Ban spent the day adjusting to becoming a Seoulite and reaching out to youth.

He visited a community office in Sadang-dong in Dongjak District, where he resides, to register as a citizen of Seoul after living 10 years in New York.

“Youth unemployment is a problem in Korea, as well as the rest of the world,” Ban said during the visit, pointing out that while youth unemployment here is nearly 10 percent, “it feels closer to 20 percent.”

He added, “Youth are the heroes of the future and need to have big hopes. Current leaders need to continue to build a good future. As I said yesterday at the airport, I will use my experience as a guide to help youth.”

The former foreign minister had a luncheon meeting with youths at a kimchi stew restaurant in his neighborhood.

Over the weekend, Ban plans to travel to his hometown in Eumseong County, North Chungcheong, a region considered a crucial swing region in elections, to visit his elderly mother and pay respects at his father’s grave.

Ban, who spent 46 years as a diplomat, stepped down as UN chief at the end of last year after serving two five-year terms and returned two weeks later to Seoul, arriving Thursday. His return comes amid an abuse of power scandal that led to President Park Geun-hye’s impeachment last month. If she is removed by the Constitutional Court, a presidential election will be held within 60 days. If she is not removed, the election will take place in December.

Ban told reporters Friday morning that he plans on contacting President Park since he has not properly conveyed New Year’s greetings to her.

“If there is an opportunity, I think I should greet her,” he said. “I have returned home and she is head of state, and I haven’t sent her New Year’s greetings yet, so I think it would be right to give her a call.”

But Ban, who describes himself as a progressive conservative, shied away from answering questions on political views.

Analysts point out that with two weeks to the Lunar New Year holidays, this is an important time for Ban to be seeking public support by making clear his policy vision.

In Myung-jin, the Saenuri Party’s interim leader, appeared to be courting an alliance with Ban, as he addressed the former UN chief’s remarks on settling the so-called hegemony issue, which refers to power struggles within parties. “We may be of the same mind,” In said.

“Ban was able to see our reality accurately because he watched from abroad,” In said in a press conference Friday. “The core of Saenuri Party’s reforms is to abolish hegemony, and Ban’s thoughts are the same, so I felt a sense of alliance.”

Rep. Yoo Seong-min, a presidential hopeful who defected from the Saenuri Party to create a new conservative splinter party, said to reporters Friday, “I want to hear his vision or policies, or if he has a concrete solution to the problems that are acutely felt by the people or those that affect their basic livelihoods.”

He said he was wary of Ban’s statement that he is open to an alliance with anybody, saying, “I would like to emphasize a principled alliance.”

Choo Mi-ae, chairwoman of the main opposition Minjoo Party of Korea, said in a supreme council meeting at the National Assembly, “The very people who drove Korea into a general crisis are the people who are beside former Secretary General Ban, the people from the Lee Myung-bak and Park Geun-hye administrations.”

Woo Sang-ho, the party’s floor leader, said, “Ban’s debut was a failure. He did not send out a message with any particular vision or new content.”

Ahn Cheol-soo’s People’s Party also expressed concerns over where Ban stands, and Yang Sun-pil, a deputy spokesman of the party, said in a statement, “Many people hold the suspicion that Ban will play the role of just extending the Park Geun-hye government and reviving the Lee Myung-bak administration.”

Ban the previous day called “for a change in politics, not for a change of government,” but Yang pointed out that this could be a “dangerous remark.”

There have also been questions as to whether Ban is even eligible to run as president because of his foreign residency for the past 10 years serving as UN secretary general.

The National Election Commission made clear Friday that Ban is indeed able to run in the next presidential election under current law.

The commission said that according to election laws, Korean citizens who are 40 years old or older and who have lived at least five years in the country before the date of an election can become a candidate.

An amendment to the presidential election law in 1987 deleted the requirement that a presidential candidate must have continuously lived in the country for at least five years to be eligible to run.

The commission added that the late Kim Dae-jung, who served as president from 1998 to 2003, lived abroad for a year in the United Kingdom in 1993, though he was elected in December 1997.

The commission added, “Under regulations, former Secretary General Ban is eligible to run.”