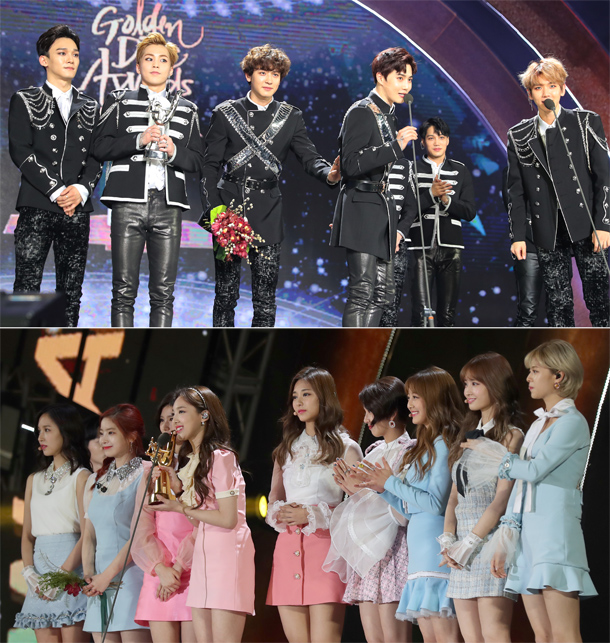 K-pop groups Exo, top, and Twice, bottom, took home the highest honors at this year’s Golden Disc Awards over the weekend. The awards ceremony, in its 31st iteration, celebrated the achievements of artists in 2016. [ILGAN SPORTS]

It was a big weekend for the record-setting boy group Exo, the cheery girl group Twice and indie powerhouse Bolbbalgan4.

The 31st annual Golden Disc Awards were held at Kintex in Ilsan, Gyeonggi, on Friday and Saturday to honor the top music artists of last year. The event dedicates one day, Friday, to awards for top songs of the year and Saturday to the best albums.

This year’s ceremony was a particularly special moment for Exo as they set a new record for most consecutive awards for Album of the Year, winning their fourth for the album “Ex’act.” Since winning Rookie of the Year in 2013, they have earned awards for their albums “XOXO” in 2014, “Overdose” in 2015 and “Exodus” last year.

Since the release of their latest record last May, Exo has managed to sell 1.14 million copies (including repackaged versions). Combined with the sales of their holiday record “For Life” (420,000), the album “Hey Mama” from their sub-unit Exo-CBX (270,000) and group member Lay’s solo album “Lose Control” (260,000), the nine members of the popular boy band have sold a combined total of over two million records in 2016. 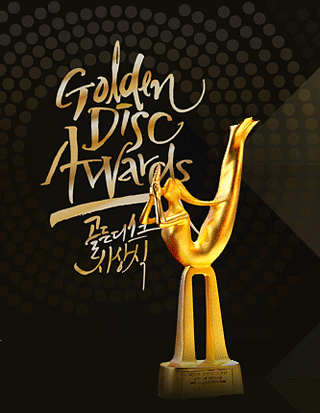 In addition to winning another album-related award and the CeCi Asia Icon Award, the group managed to take home three awards at this year’s ceremony.

“While we win many awards, the ones we get from the Golden Disc are particularly special,” said group leader Suho. “We would like to thank our mentor Lee Soo-man [CEO of SM Entertainment], the SM family and our fans.”

The winner of the Global K-Pop Artist Award and runner-up for Album of the Year was the boy group BTS, whose international popularity became a hot topic of discussion last year. BTS sold more than 1.1 million records last year. Their album “Wings” has sold 750,000 copies since its release in October, and their special album “The Most Beautiful Moment in Life: Young Forever” has sold 360,000 since May. Their producer, Big Hit Entertainment CEO Bang Si-hyuk, took home the award for Best Producer.

Girl group Twice was the big winner on the first day of the ceremony, taking home the award for Song of the Year with their hit single “Cheer Up.” The explosively popular track has been streamed 100 million times and garnered the same number of views for their music video on YouTube, becoming the first girl group to do so. Despite competition from K-pop heavy hitters like Big Bang and Psy, Twice became the first girl group to win the top song award since Girls’ Generation did in 2012.

The runner-ups for the song category consisted of nine winners including girl groups GFriend and Mamamoo. GFriend’s popularity soared last year after winning the rookie award at the last ceremony thanks to their schoolgirl concept and successful singles like “Rough” and “Navillera.”

Mamamoo has earned a name for themselves as a group that consistently delivers quality songs, and they have proven themselves last year with singles like “You’re the Best” and “Decalcomanie.”

This year’s rookie awards went over to girl group Black Pink and acoustic duo Bolbbalgan4. YG Entertainment’s first girl group to debut in seven years topped charts left and right with “Whistle” and “Playing with Fire,” while the indie group surpassed everyone’s expectations as their single “Galaxy” remained at the top of the charts among popular mainstream idol singers.

Veteran artists also received recognition at the event. The reunited boy band Sechs Kies took home their first award since 1999 for Best Male Performance Group, while singer Im Chang-jung was one of the nine runner-up winners for top song.