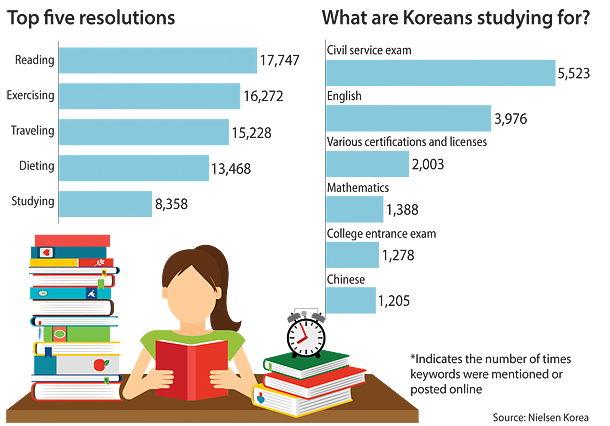 While much can be said about the spike in gym memberships and diet program enrollments around the start of the new year, Koreans’ top resolution for 2017 had more to do with the mind than the body.

According to data compiled by Nielsen Korea, the five most popular New Year’s resolutions include reading more, exercising, traveling, dieting and studying.

The results were based on 245,000 posts from online blogs, forums and social media networks between Jan. 1 and 7.

“Even though local publishing companies have been experiencing a slump recently, the study found that more people are interested in reading books this year, and we hope there are various campaigns and promotions launched to have more people keep their resolution,” Nielsen said in a press release on Monday. “Studying came in fifth place for resolutions this year, and many were interested in doing so to get a job or change jobs.”

Among those resolving to study more, most are hoping to take the civil service examination. Others are studying English, mathematics and for professional certifications. Also high on the list were the college entrance exam and Chinese.

For intrepid travelers, the United States was the most popular prospective destination, followed by China, Japan and Jeju Island. “We found more people were interested in traveling abroad, especially to coastal locations,” the report said.

Because this is the first time Nielsen Korea released such a study, the firm said it was difficult to tell if some of the popular resolutions have changed from the past. Nielsen did note it was interesting that quitting smoking did not make the top five for New Year’s resolutions.

“We think the resolutions we found were from a relatively younger generation as they tend to use social media and the internet more,” a Nielsen representative said. “We believe quitting smoking wasn’t high up on the list because smokers tend to be a little bit older.”