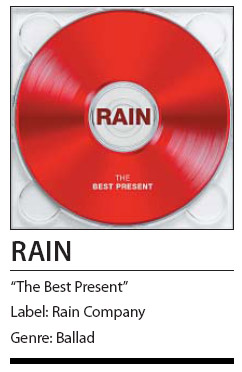 Rain is back, after about a three-year hiatus, with a single “The Best Present.” The song itself garnered attention not just because it’s Rain’s come back song after serving his mandatory military service, but because it’s been composed by international icon Psy. The piano-led ballad starts off lyrically, and it builds as he sings how much he loves his girl, who the artist admitted was inspired by his actress girlfriend Kim Tae-hee. The lyrics were written by Rain with the help of Psy. Rain said he hopes this song become “the proposal song” of 2017. The music goes well with Rain’s lyrics but the background track alone is also very appealing and listeners can check out the instrumental version when they need peace and quiet.

Rain is known to choreograph his own dances and his latest moves are definitely smooth with finger-snapping beats. He manages to put on a professional show, but it’s difficult to ignore the fact that the whole show is inspired by Michael Jackson. He even has a fedora on his head, like the King of Pop used to wear at the height of his fame.