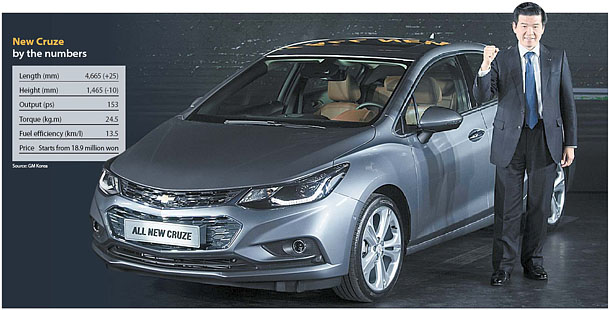 James Kim, president and CEO of GM Korea, poses with the new version of the compact Cruze sedan at a launch event in Mullae-dong, western Seoul, Tuesday. [GM KOREA]

GM Korea is trying to make significant inroads into the compact sedan market - long been dominated by Hyundai Motor’s Avante and Kia Motors’ K3 - with a fully overhauled version of the Chevrolet Cruze.

The compact sedan that debuted in 2008, is back after nine years with a sporty exterior, roomier interior and enhanced driving and safety features.

“GM Korea gained confidence last year by overtaking the No. 1 spot in the subcompact car segment from Kia’s Morning after nine years with our all-new Spark,” said James Kim, president and CEO of GM Korea at a launch event in Mullae-dong, western Seoul Tuesday. “I believe the all-new Cruze can outperform the Avante.”

The biggest strength of the new Cruze is its sleek exterior design that resembles a sports sedan supported by longer bodywork and a lower height. 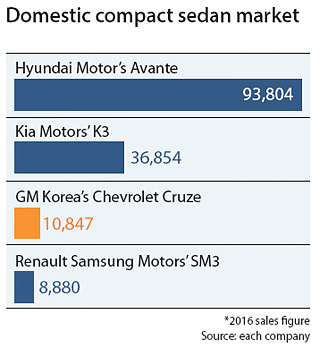 The length of the Avante, the most popular compact in Korea, is 4,570 mm. GM Korea also lowered its height by 10 mm to give the vehicle a more sleek look. Following the trend of premium vehicles, the headlights and tail lights have been equipped with LEDs.

The new Cruze is 110 kilograms (242.5 pounds) lighter than the original, leading to a more agile driving experience.

GM Korea also enhanced the rigidity of the car’s body frame by 27 percent for safety. Every trim of the car will be equipped with six airbags. Also, for the first time in the compact car segment, the all-new Cruze has been equipped with a lane-keeping alert system. In infotainment, the car features a self-developed navigation system and Apple CarPlay which enables the driver to easily link an iPhone to the system.

GM Korea’s ultimate ambition with the Cruze is to not only outperform existing rivals in compact segment but to become a potential threat to cars in other segments as well.

“There is no direct competitor [for the all-new Cruze] because we are going to redefine the segment,” said Dale Sullivan, vice president of sales and marketing at GM Korea.

“This car will not only compete in the compact segment but also the D-segment and compact SUV segment as well,” he added. “The all-new Cruze is at the very high-end of the C-segment.”

Korea’s compact sedan market has been shrinking since 2012. Last year, 164,014 compact units were sold, according to Korea Automobile Manufacturer Association, an 8.9 percent drop compared to the previous year. In 2012, a total of 207,548 compact cars were sold.

The popularity of SUVs and subcompact cars has eaten into compact sales.

Also, the price range for the all-new Cruze has been set at a higher level than those of its competitors.

Customers can place reservations for the new Cruze starting from Tuesday.