‘Rather than praise our history, Ewha must make a new one’

‘Rather than praise our history, Ewha must make a new one’ 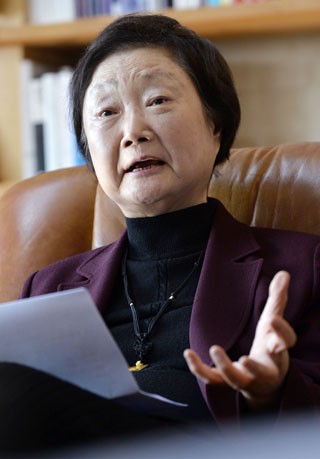 What happened at Ewha Womans University made the people of Korea frown in frustration. It started with a rude comment from Chung Yoo-ra, daughter of Choi Soon-sil and a student at the school, when she was found to have received preferential treatment from some of the faculty members.

“Blame your own parents if they don’t have the ability to do likewise,” Chung wrote. “Don’t point fingers at us if your parents don’t have what it takes. Money is also a form of ability.”

As the ongoing investigation reveals the allegations of educational corruption within the walls of Ewha Womans University to be true, the school’s reputation has been tarnished deeply, especially its morality and integrity. To discuss how the 210,000 Ewha alumnae feel about the scandals, the JoongAng Ilbo met with a faculty member.

Mo Hye-jung, 78, the first official female physicist in Korea and an honorary professor at the school’s department of physics, has lived her whole life as an “Ewhan.”

“I was very upset, as I think the pride and value of Ewha are those of my pride and value,” said Mo. The senior professor agreed to an interview after long contemplation, worried that she may be doing more harm than good to her alma mater, but she ultimately decided somebody had to speak up.

The interview took place in Asan, North Chungcheong, at her residence on Jan. 11. The following is an edited excerpt of the interview.


Q. As you have lived your whole life as an Ewha person, do you feel frustrated about the current scandal?

A. My ties with Ewha go back 40 years, when I got into the school in 1958 as a physics major. I went to Ewha Womans University and taught at the attached middle and high school before I took up the job as a professor at the university for 34 years. To be frank, it’s been 12 years since I retired in August 2004, so I’m not fond of the specific details of what’s going on in the school. But even through the press reports, I knew that things weren’t right. I dare not speak on behalf of all the 210,000 Ewha alumnae. I have no right. But I do see the picture clearly from a step back.


Namkung Gon, former dean of admissions at Ewha, and Yi In-hwa, a professor at the university, were arrested on charges of unjustly admitting Chung to the university and giving her unearned credits. The prosecution will seek arrest warrants for Kim Kyung-sook, former dean of College of Science, and Choi Kyung-hee, former president of Ewha Womans University, will also be summoned. What are your thoughts?

Universities should be vanguards of justice. It’s just hard to comprehend what they were thinking. How could a professor be involved in an unlawful admission or give false credits? What’s more shameful is that all the professors said “no” to all the questions at the hearing. If they’ve done wrong, they should own up to it, not give excuses. That’s the duty of a true educator. But I guess they had their reasons.


What do you think is the primary cause of the scandal?

The abuse of power throughout society has infiltrated universities. The wrongs of society do not run separately from the wrongs of the educational world. But it does break my heart to see that my school has proven weak against the wealth and power of society.

The school just rushed things. It failed to communicate properly with members of the school to get funding from the Ministry of Education. A school of continuing education and the special admission of Chung Yoo-ra are not essential to the university. They weren’t focused on the important things, but were too keen on getting money. I think that’s what started the whole problem.


Was there something wrong with the management of the school?

My school had never been owned by anyone. It had been running in a very democratic manner in the beginning, and the school’s constituents had trusted it to do so. But then one day, a handful of people began taking over the management behind closed doors.

The school’s governance and the management structure started falling apart because it was run by just a small number of people who were acting as if the school was their possession. A dictatorship of any community closes the doors of communication between its constituents and the managers.

Chung Yoo-ra is the results of one such governance that has failed to communicate with its own members. Those at the bottom of the hierarchy might not have had any idea about what was going on in the upper levels.


Do you mean that the school’s foundation needs reform?

The board of directors needs to be comprise professional individuals who are well-learned in their fields, and run by a very open and transparent system in which people get to share their ideas. That way, the school doesn’t fall behind social trends and members’ expertise is fully utilized. There’s no point having a director who doesn’t know a thing about how a university runs.


What do you think about the other professors who turned their backs on the justice of education?

A professor must have the guts to stand up to injustice. I’m sad to see that they’ve actually been used by the highest presidential authority and its private interests. They also neglected their students, who protested in the scorching heat against the establishment of a continuing education program. To be a true professor, one must fully realize the traditions and value of Ewha. Students are not people you just give grades to, they are your children.


What do you think about people who say this is a crisis for Ewha Womans University?

I think it’s not true. The biggest political scandal ever would not have been uncovered were it not for Ewha Womans University. I felt the power of our school. I’m actually very proud of the fact that the students and the alumnae came together to reveal the truth. Even when the president said she will abort the continuing education program, the students didn’t back down.

That’s when the Chung Yoo-ra case was unveiled. Never have students done anything like this. They are truly bright and brave. The Slow Snail Democracy [a group formed by students at Ewha Womans University who pledged to bring democracy to the school] proved likewise.


The school will be electing its new president soon. What kind of a leader do you think the school needs?

President Kim Ok-gil [president of Ewha from 1964 to 1971] was one such person with guts. [During the 1970s nationwide movement for democracy against dictatorship was taking place] she told police to “arrest me first if you’re going to arrest our students.”

She was a president who stood by her students, a friendly and warm teacher. I hope the new president will be like her. A president needs to properly understand what it means to teach people. Also, they must have professional knowledge and a vision about the research in their field.


What must Korean society change to raise more female leaders?

Childcare policies. Smart women don’t want to have children anymore. The low birthrate starts there. Women will socially participate more and have children only when childcare has been taken care of. Men have to take a larger role in raising their kids. That way, women can become leaders in all parts of society without having their careers cut short because they have to raise their children on their own.


What would you like to say to Ewha Womans University?

Ewha shouldn’t stop at taking pride in its history. It must also help make a new one, so this painful lesson can become a starting line for us to move forward.