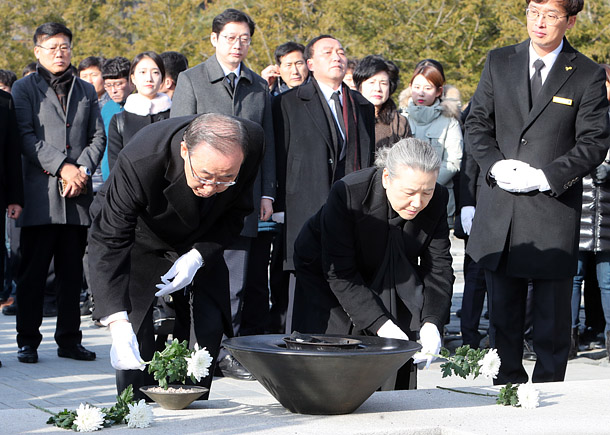 Former UN Secretary General Ban Ki-moon said he would decide which political party to align himself with sometime after the Lunar New Year holiday, known in Korea as Seollal.

During a meeting with reporters Monday night, he noted that no one has ever won the presidency without the support of a party organization, giving his strongest signal yet that he is intends to choose a political party in his journey to the Blue House, though he has yet to declare his bid for the job.

When asked about creating his own party rather than joining an existing one, he said doing so “would be hard.”

Ban made a number of frank remarks Monday in a departure from what has been known as his so-called slippery-eel manner, a mocking description of the way Ban speaks in formal surroundings to avoid getting himself into sensitive topics or answering political questions.

Ban confessed he had been pouring his own finances into his soon-to-be declared presidential campaign, saying renting his virtual campaign office in Mapo District, western Seoul, hiring two drivers and two vehicles and a personal aide were all paid for by himself, whereas in the past he had been provided with such amenities as a public official.

“I am not saying I need to join a party solely because of money,” he said, “but it is an aspect that can’t be ignored.”

Ban denied allegations that he took a bribe of $230,000 from a businessman in 2005 as foreign minister and in 2007, shortly after being elected UN chief, saying that, if elected, he would resign as president if such rumors turned out to be true.

He also said he had felt it was his “destiny” to run for president, as many people began urging him to do so, telling him he was the only one qualified for the job as the country was deeply troubled by the scandal that led to President Park Geun-hye’s impeachment.

He also indicated that he would not join the ruling Saenuri Party, as it was split with the defection of 30 lawmakers, who subsequently formed their own party, the Bareun Party. He said he would have otherwise joined the Saenuri Party. This leaves the Bareun Party and minor opposition People’s Party as the two most likely candidates for Ban to join, as the major opposition Democratic Party, formerly known as the Minjoo Party of Korea, already has several presidential hopefuls - former Chairman Moon Jae-in, Seongnam Mayor Lee Jae-myung and others.

If Ban chooses to join the Bareun Party, he is likely to face off against Rep. Yoo Seong-min, an economist-turned-lawmaker. It is expected that Saenuri lawmakers who represent districts in Chungcheong will follow Ban’s decision to join the Bareun Party. Another possible scenario is for him to forge an alliance with the People’s Party, which has its support base in the Jeolla region.

If Ban sides with the People’s Party, this will be reminiscent of the so-called DJP alliance, which was forged ahead of the 1997 presidential election by former President Kim Dae-jung, who had a fervent support base in Jeolla, and former Prime Minister Kim Jong-pil, who enjoyed backing from Chungcheong.

Ban expects similar enthusiasm from Chungcheong voters as he is from there, but he would also have to confront Ahn Cheol-soo, the software mogul-turned-politician who recently proclaimed this year’s election would be between himself and Moon Jae-in.

While Ban played down the possibility of launching his own party, observers note that he could form his own party by reaching out to Kim Chong-in of the Democratic Party, a vocal critic of Moon, and other anti-Moon politicians in the opposition bloc such as Sohn Hak-kyu.

With much speculation on Ban’s decision circulating, the former UN chief continued his national tour, apparently to boost his presidential prospects on Tuesday. He visited the grave site of the late President Roh Moo-hyun, who had actively campaigned for Ban’s election in the United Nations during his time in office.

But Ban’s visit was not without detractors, who greeted Ban on his way to the site in Gimhae, South Gyeongsang, with picket signs that read, “Welcome, Ban the betrayer.” Roh’s supporters, many of whom support Moon, have argued that Ban did not attend Roh’s funeral in 2009 to avoid upsetting the conservative Lee Myung-bak government.

Ban visited the late president’s grave site in December 2011 but requested that the media not publicize it, citing the private nature of the event. This exacerbated the sense of betrayal felt by Roh supporters.