Kim Ki-choon summoned as part of probe into blacklist

Kim Ki-choon summoned as part of probe into blacklist 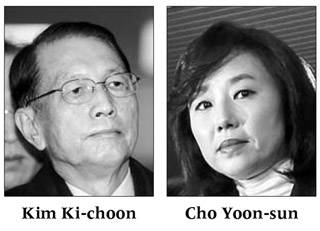 The independent counsel investigating the corruption and power abuse scandal of President Park Geun-hye and her longtime friend, Choi Soon-sil, summoned on Tuesday former presidential chief of staff Kim Ki-choon and Minister of Culture, Sports and Tourism Cho Yoon-sun to probe the government’s systemic campaign to blacklist artists critical of the Park administration.

The alleged blacklist was reportedly created in mid-2014, and is said to contain over 10,000 artists, singers, filmmakers and more labeled as leftists or critical of the incumbent administration. Kim and Cho are alleged to have created and managed the blacklist.

“The counsel will decide whether to request an arrest warrant on Kim and Cho after the questioning,” said Lee Kyu-chul, spokesman for the independent counsel team. The questioning lasted through Tuesday afternoon and was not finished by press time.

“Kim and Cho are accused of serious crimes here,” Lee said, “where they are alleged to have violated the freedom of expression of citizens.” The two were summoned as suspects in the scandal, accused of power abuse and interference with the exercise of other’s rights.

Kim showed up at the counsel’s office in Daechi-dong, southern Seoul, at 9:46 a.m. on Tuesday. He stepped into the building without answering reporters’ questions, including, “Why did you try to destroy evidence?”

“We have found evidence in raiding Kim’s house last month that he tried to destroy some evidence against himself,” Lee said.

Cho had arrived a few minutes earlier, at 9:15 a.m. to submit to the counsel’s questioning.

“I will answer the questions to my best,” she told reporters. “I hope the counsel will reveal the truth.”

Cho had admitted to the parliamentary committee investigating the Choi-gate scandal last week that there existed a list of names to exclude from public funding, overturning her earlier testimony at the committee after persistent grilling at the hearing.

During its investigation into the alleged abuse of power by Park, Choi and other associates, the team of Independent Counsel Park Young-soo reportedly obtained testimony from a senior official at the Ministry of Culture, Sports and Tourism about Kim’s order to create the blacklist. Kim reportedly made the order directly to then-Culture Minister Kim Jong-deok.

The independent counsel also obtained testimony from other officials that former Chief of Staff Kim explained the intention behind creating the blacklist during his meeting with former Minister Kim. Kim Ki-choon reportedly called the cultural figures and artists critical of the government “Reds” and referred to the plan to cut government support as an “annihilation policy.”

Kim had denied the allegation during a National Assembly hearing in December last year.