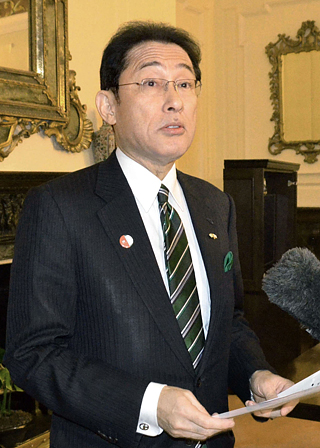 Amid escalating friction between the two countries over statues in Seoul and Busan commemorating Japan’s wartime sexual slavery, Kishida told reporters in Tokyo Tuesday morning that Takeshima, Japan’s name for Dokdo, is “Japan’s inherent territory based on international law and history.”

The Japanese envoy’s remark came after a group of Gyeonggi lawmakers Monday began raising funds to build on the Dokdo islets a statue representing the victims of the Japanese military’s forced recruitment of girls and young women into sexual slavery before and during World War II.

Japan has been sensitive to these statues honoring the victims of sexual slavery, euphemistically referred to as comfort women, especially the one erected across from the Japanese Embassy in central Seoul and one installed behind its consulate in Busan at the end of last year.

Kishida said on the Gyeonggi assemblymen’s move to erect a comfort women statue on Dokdo, “We cannot accept this.”

On Monday, a group of 34 lawmakers of the Gyeonggi Provincial Assembly held a ceremony to launch a fundraising campaign to erect comfort women statues on Dokdo and in the assembly building. The group, led by Min Kyung-sun, a Gyeonggi provincial assemblyman, plans to raise 70 million won ($59,620)to erect the statues.

It plans to install the statue on Dokdo on Dec. 14 to celebrate the sixth anniversary of the first bronze statue of a young girl, called the Peace Monument, installed in front of the Japanese embassy in Seoul in 2011, which has become an international symbol of the victims’ cause.

“It has been five years since the Peace Monument was installed in front of the Japanese Embassy, but Japan still continues to distort history and become more right-wing,” Min explained, “so the Gyeonggi Provincial Assembly took an active interest and is pushing to build the statues on Dokdo and in our assembly.”

Seoul says that there is no dispute over Dokdo, a part of Ulleung County in North Gyeongsang, maintaining it is its territory in terms of history, geography and international law.

The Korean Ministry of Foreign Affairs lodged a strong protest over Kishida’s remarks on Dokdo to an official of the Japanese Embassy in Seoul Tuesday afternoon.

“Our government deplores that the Japanese government once again made unjustifiable claims,” said Cho June-hyuck, spokesman of Korea’s Ministry of Foreign Affairs, in a briefing Tuesday, “and urges it to immediately withdraw claims over Dokdo, which is clearly an integral part of Korean territory.”

He added that Chung Byung-won, the Foreign Ministry’s director-general of the ministry’s Northeast Asia Affairs Bureau, summoned a minister from the Japanese Embassy in Seoul to lodge a formal protest.

But some lawmakers on the North Gyeongsang Provincial Council have expressed worries about the installation of a statue on Dokdo, and the diplomatic repercussions.

Nam Jin-bok, a North Gyeongsang provincial councilman, said Monday, “Dokdo is about protecting our territorial sovereignty and the statue is over the issue of wartime sexual slavery, and mixing the two issues can bring about diplomatic problems.”

Japan has temporarily recalled Japanese Ambassador to Korea Yasumasa Nagamine and Yasuhiro Morimoto, the consul general in Busan, to protest a local civic group installing a comfort women statue near the back gate of the Japanese consulate in Dong District, Busan at the end of last year.

The bronze was erected to coincide with the one-year anniversary of the Korea-Japan agreement to resolve the comfort women issue struck on Dec. 28, 2015, which included a Japanese government apology and a 1 billion yen ($8.83 million) fund for the victims.

Tokyo has been demanding the comfort women statues near its missions to be removed, while Seoul maintains that any decision to remove them is up to the private civic organizations that installed them.

Kishida told reporters that “nothing is decided” yet on the return of the Japanese top envoys to Korea.

Korean Foreign Ministry spokesman Cho said on the Korea-Japan deal of 2015, “In our perspective, as the comfort women deal is being faithfully and steadily implemented, we want to raise the agreement’s acceptance domestically and look forward to developing our two countries’ relations in a future-oriented manner.”