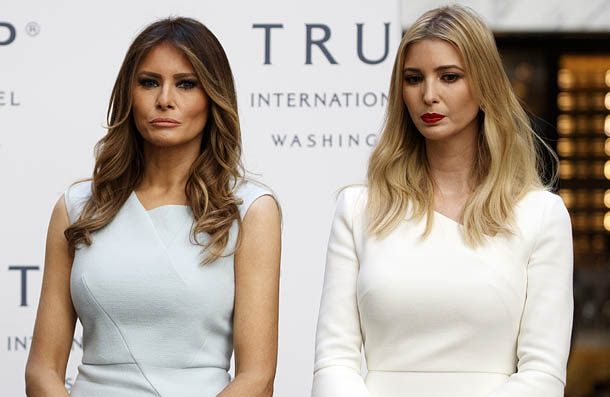 NEW YORK - What’ll she be wearing?

It’s a question that fascinates fashion-watchers - and lots of others - every four years: Which designer will the new U.S. first lady choose to wear on Inauguration Day and, more importantly, on Inauguration Night?

This year, as never before, the question is a loaded one. Dressing the first lady has long been considered a great honor for a designer - and a huge business boon. But in an industry that leaned heavily toward Hillary Clinton, a number of designers have indicated they have no interest in dressing Melania Trump. So the question is not merely whom she’ll be choosing - if she doesn’t simply buy off the rack - but also, in a sense, who will be choosing her.

And the first lady’s inaugural attire is not the only example of how political concerns have seeped into fashion lately in unexpected ways.

The fashion choices of Ivanka Trump, the daughter who many believe will serve as a quasi-first lady, have also come under scrutiny.

She recently announced she’s leaving her executive position at the Ivanka Trump clothing and accessories brand, calling it a “formal leave of absence” as she and her husband, Jared Kushner, head to Washington, where he will be a senior adviser to his father-in-law.

But what about her role as the brand’s most visible ambassador? Ivanka Trump frequently wears her own label, as she did with a fitted pastel pink shift dress at the Republican National Convention in July, and with a $10,800 bangle bracelet on “60 Minutes” in November.

She hasn’t said whether she’ll continue to wear her own label; a spokesperson declined to answer when queried by The Associated Press. If she does, it could be viewed as promoting the brand.

Of course, neither Ivanka nor Melania Trump (nor anyone else) needs permission to wear a designer; they can buy whatever they like.

But since high-end first lady fashion is often custom-made, as it often was for Michelle Obama, a designer’s choice comes into play.

The debate began in November when New York-based designer Sophie Theallet said she would not dress Melania Trump, citing “the rhetoric of racism, sexism and xenophobia unleashed by her husband’s presidential campaign.”

Few designers made such public declarations, but when asked, a number said they, too, would not want to dress the first lady, among them Marc Jacobs.

Others said they’d be happy to, including Tommy Hilfiger and Carolina Herrera. Thom Browne said he’d be honored, “out of respect for the position” of first lady. Browne designed Mrs. Obama’s daytime inaugural outfit in 2013.

Others have wondered whether designers should even be talking about politics when it comes to dressing first ladies. Naeem Khan, the Indian-born American designer who often dressed Mrs. Obama, thinks it’s an important discussion.

“Every designer has a point of view,” Khan said in an interview. “A designer is an artist, and should have the choice of who they want to dress or not.”

For Khan, the choice is clear. Though he was approached by a common social friend about possibly designing an inaugural gown for Melania Trump, he says, he declined to pursue the opportunity.

“I don’t think it’s right,” he said, citing in part his long association with Michelle Obama, whom he dressed close to 20 times, including a shimmering gown for her first state dinner, with India’s prime minister. He was quick to note that Melania Trump “might be a great person for all we know.”

But, he added, “the values of this administration do not comply with the values of who I feel we are as a nation.”

Whom will Melania Trump pick? She wore a sleeveless black Dolce & Gabbana dress for New Year’s Eve (believed to have been purchased off the rack), drawing thanks on Instagram from Stefano Gabbana and speculation she might choose the Italian designers.

But others think she’ll more likely choose an American designer, perhaps Ralph Lauren, whose designs she wore in the campaign. Or perhaps she might, like Mrs. Obama in 2009, choose to boost the profile of lesser known designers.

“The impact of the first lady is really, really powerful,” said Khan. “It turned us into a global business.”

Anthony notes that politics crept into inaugural fashion before, but only after the fact, when an outfit was deemed too expensive in a time of economic hardship.

“This is the first time that this moment is being used by professionals and people in the fashion industry as an opportunity to put their political views out there in public,” he said.

Even the fashion choices of Donald Trump himself have come under discussion.

Santo Versace, president of Gianni Versace fashion house, told Italy’s state RAI radio that he welcomes Trump as a client in any Versace boutique. But he added:

“Honestly, I personally wouldn’t dress him. He says many things that I don’t like.”