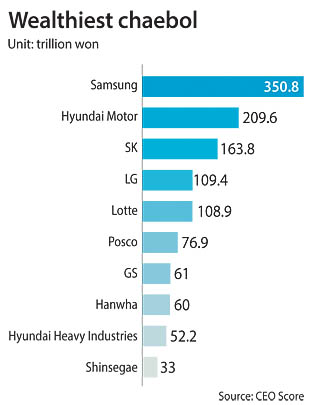 The list of Korea’s 10 wealthiest conglomerates, or chaebol, rarely changes, but for the first time in six years, Hanjin has been pushed off the list, a sign that the downfall of its shipping unit has hurt its assets, according to the latest ranking from CEO Score, a research firm that tracks the management activities of Korea’s major companies.

Shinsegae’s assets rose 13 percent last year, bringing it from No. 13 to No. 10 to take Hanjin’s place. Hanjin, whose shipping unit filed for bankruptcy protection last year, saw an asset decrease of 20.9 percent and had to shed eight of its 38 subsidiaries. The group fell to No. 13.

Collectively, the top 30 companies’ assets rose 1.2 percent to total 1,560 trillion won ($1.32 trillion). Kolon Group made it back to the top 30 list after being pushed out two years ago. Hyundai Group, not to be confused with Hyundai Motor Group, failed to make the top 30. The group’s businesses include elevators, economic research and hotels. The more lucrative automaking, steel and retail businesses were spun off long ago.

Mirae Asset Financial Group made the biggest leap in ranking this year, moving up to 18 from 24. The biggest contributor was its recent acquisition of Daewoo Securities, which gave the group an additional 5.1 trillion won in assets to total 16 trillion won. It also gained 14 more subsidiaries.

In terms of total asset growth, Lotte Group ranked first with a 5.6 trillion won increase. Hanwha Group followed with 5.3 trillion won, and Mirae Asset was third. All five top conglomerates, except Hyundai Motor Group, expanded their assets despite a sluggish economy. Hyundai Motor had a difficult year due to unimpressive automobile sales and union strikes that affected manufacturing in the year’s second half.