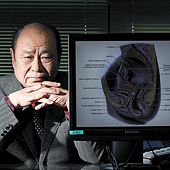 Chair Professor Lee Jeong-bin sits in the Dankook University laboratory on Thursday. On the monitor is a picture of the female anatomy used by Lee to find clues in a recent case. [KIM KYUNG-ROK]

On Wednesday, the court gave the accused a life sentence in a case involving the rape and murder of a female high school student at Naju River in South Jeolla 16 years ago, a verdict that could not have been reached if Gwangju Chief Prosecutor Park Yeong-bin had not elicited the help of Lee Jeong-bin, a forensics doctor and chair professor at Dankook University.

The supreme prosecutor gave Lee the role of chairperson of the Forensics Consultation Committee in 2014, when the prosecution took over the case from police. On Feb. 4, 2001, police discovered the suspect’s DNA on the body of the female high school student, but could not establish that she was raped or that he killed her. The autopsy led Lee to conclude that the girl had been strangled, but the suspect was cleared due to a lack of evidence.

Park’s family pleaded for a new investigation, and when it began, Lee offered his support on the case. Last summer, he went through the records again and noticed there was no evidence to place Park’s time of death. Just before Lee was about to call it quits, he noticed a paper drawn up by the police forensics team, showing that the suspect’s DNA in Park’s body had not mixed with her menstrual blood.

Lee was unable to obtain blood and semen samples from the suspect, so he drew blood from his own forearm and asked his son, also a doctor, to provide a semen sample.

After Lee stored the semen in a clear sterile bag, he slowly poured in the blood. Even after seven hours, the blood and semen did not mix, but when he agitated the contents of the bag, they did mix. Lee inferred from this that after being raped, Park was not moved. On the basis of Lee’s results, the court was able to determine that the rapist was also the murderer.

“The police forensics team’s first investigation was good,” Lee said. “When the feelings and autopsy results of the investigation and trial coincide like this, it’s exciting.”

His 37 years of experience in forensics have taught him the value of experimenting. He has even admitted to stabbing a dead dog at a boshintang (dog-meat soup) restaurant before it was cooked to help him imagine what would happen if a person was stabbed.

Since the 1980s, Lee has participated in a variety of investigations and conducted countless autopsies. His cases have involved the Hwaseong serial killer, the death of Yonsei University student Lee Han-yeol and the task of identifying the remains of Chang Chun-ha, the democracy activist and journalist.

“Forensics resolves injustices and is more than just a study - it helps people,” said Lee. “Forensics cannot resolve all cases, but with the ‘Taewan’ Law (Statute of Limitations for Murder Revocation Law), difficult cases will be resolved some day through recording and analyzing the exact writings and pictures of the bodies’ conditions.”