‘I paint so my family can remember me’

‘I paint so my family can remember me’ 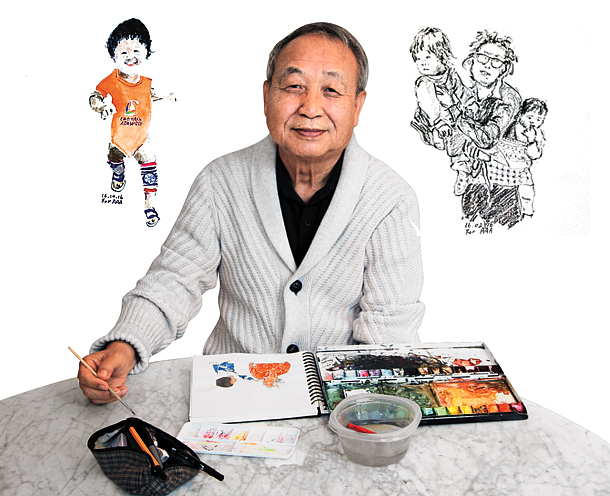 Lee Chan-jae, an ethnic Korean immigrant who lives in Sao Paulo, Brazil, has been painting in a sketchbook every day and uploading photos of his work to Facebook and Instagram since late 2015.

The 75-year-old has been doing this for his three grandchildren, who live in Korea and the United States. The water paintings are of his memories with them, traditional Korean culture and the scenes he wants to share with them.

His story received attention when the BBC interviewed him recently. His Instagram (@drawings_for_my_grandchildren) followers surged from 40,000 to 186,000.

It began with Lee Ji, his son, who made a video of his father’s story and uploaded it to his Facebook account on Nov. 28. He titled the video “How my grumpy 75-year-old father learned Instagram to show his love to his three grandchildren.”

The video has been viewed almost 5 million times.

Now Lee’s social networks have turned into spaces where people from around the world share their heartwarming stories. And whereas Lee did not even know how to use an email before, now he is an Instagram star.

When the JoongAng Ilbo called him for an interview, he was staying at his son Lee Ji’s house in Brooklyn with his wife, Ahn Kyung-ja.

The couple worked as high school teachers during the 1970s. Lee taught earth science while Ahn taught Korean. They followed Ahn’s family to Sao Paulo in 1981. His first son, Lee Ji, and younger daughter were then 10 and 6 years old.

The son has been working at Facebook since 2011, after majoring in graphics and communications design at Parsons School of Design.

The couple retired in 2011 after running a clothing shop for three decades in the capital city of Brazil. Since then, Lee’s greatest joy has been taking care of his daughter’s children, who are 13 and 12 years old.

But his life changed when the daughter’s family moved back to Korea in 2014. Lee found himself idling the days away. Concerned about his father, Lee Ji suggested he send a painted letter to his grandchildren over social media.

“My father wondered why he had to share his drawings with strangers,” Lee Ji said. But his father’s view changed when his grandson Astro was born in April 2015.

“When this baby becomes an adult, I won’t be in this world any more,” he told the family after holding the newborn at the son’s house. “I will paint to leave a memory of myself.”

The grandfather began by spending two weeks learning how to use social media.

“I was so amazed and glad to see people ‘like’ my work,” he said.

His biggest joy is knowing his two grandsons check out his work after school. “I just can’t skip a day to think they look forward to my drawings every day,” he said.

Now he is so accustomed to the digital world he can use hashtags, which the son describes as a “revolutionary event.”

Lee’s painting tools have diversified over time, too. He now uses not only watercolor but also Chinese ink, crayons and charcoal, and won’t leave his seat until he is satisfied with the outcome.

His works have also evolved into a family project. His wife usually proposes what to draw and his son translates the Korean text into English, while his daughter translates into Portuguese. The four chat with each other every morning on Facebook messenger to discuss each new work.

“My life has changed entirely after I learned about social media,” the senior Lee says. His old friends, whom he lost contact with 30 years ago, reached out to him over the network and offers for exhibitions and books have come from around the world.

“If it had not been for social media, I wouldn’t have been able to share my paintings with so many people,” he said. “I am the happiest when finding replies from some people that I inspired them to teach their parents or grandparents how to use social networks. I wish to see more families use the new technologies to live a happier life.”