Stenz makes Philharmonic debut: First concert of the year an emotive performance under a powerful baton

Stenz makes Philharmonic debut: First concert of the year an emotive performance under a powerful baton 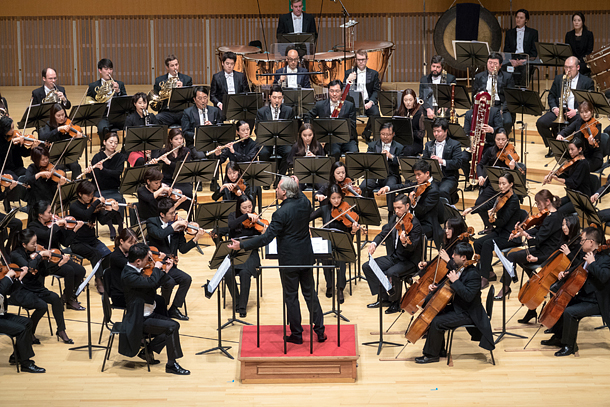 Seoul Philharmonic Orchestra performs its first concert of the year under the baton of its newly appointed Conductor-in-Residence, Markus Stenz, on Friday at the Lotte Concert Hall in southern Seoul. [SEOUL PHILHARMONIC ORCHESTRA]

The Seoul Philharmonic Orchestra’s first concert this year, held over the weekend at the Lotte Concert Hall, was highly anticipated by classical music fans for two reasons.

First, the concert program included the Asian premiere of Igor Stravinsky’s “Funeral Song,” which had been lost during the Russian Revolution, more than a century ago and had only been found in 2015. This 12-minute orchestral piece was written in 1908 as a tribute to his teacher Nikolai Rimsky-Korsakov. Before Seoul Philharmonic Orchestra’s performance, it had only been played twice, once in 1909 and last December by the Mariinsky Orchestra after it was rediscovered.

Second, it was the debut performance of the orchestra’s newly appointed Conductor-in-Residence Markus Stenz, who took the position last September.

The former should have made headlines, but what caught the audience’s attention on Friday evening - the first day of the two-day concert - was Stenz’s fantastic conducting, bringing out the best in the orchestra that has been in a rut for the past year without a music director.

The highlight was not Stravinsky’s long lost work, but the orchestra’s performance of Schumann’s 40-minute “Symphony No. 2 in C major” under Stenz’s baton.

They played all four movements of the piece, starting off powerfully with the fierce first movement “Sostenuto assai.” Despite the fast tempo of the second movement “Scherzo,” the orchestra managed to keep calm under Stenz. The third movement, “Adagio espressivo,” swept the audience with its deep emotions that resonated throughout the performance, while the fourth movement’s cheerful and rhythmic melody was enough to bring the crowd to its feet for a standing ovation.

According to the maestro, Schumann’s “Symphony No. 2” is the best pick to start his work with an orchestra.

“I’m a very concrete worker,” said Stenz during a press conference on Tuesday, prior to the concert. “I need a specific repertoire to start my work with an orchestra and Schumann - with all his freedom of thought and all his ideas, shapes and shades - is a wonderful starting point.”

Indeed, it was a perfect selection to show off Stenz’ great communication skills. The maestro with the baton is of course the commander. But it’s also important for the conductor to act as a bridge and deliver the emotions conveyed in the music on stage to the listeners in the auditorium. In that sense, there seems to be no doubts in Stenz’s musicality and credentials to be leading the once-troubled Seoul Philharmonic Orchestra.

To stabilize the orchestra while its organizing committee looks for a music director, the committee created two new positions and appointed Stenz as the Conductor-in-Residence and Thierry Fischer as the Principal-Guest-Conductor, last September.

According to the orchestra’s CEO Choe Heung-sik, its goal is to find a music director who can permanently lead the orchestra by the end of the year.

“As you know, because classical music engagements are decided two to three years in advance, it will take a few more years to make the official appointment,” said Choe. “In the meantime, we believe the two conductors will help the orchestra to stabilize and not lose its reputation as the best orchestra in Korea.”

The two conductors’ contracts end in 2019.

Since Stenz began working with the orchestra, fans have anxiously hoped for him and the orchestra to get along and wished for his success. In return, the maestro showed how passionate and enthusiastic he feels about the orchestra and is even said to have literally broke his baton during rehearsal just before the concert.