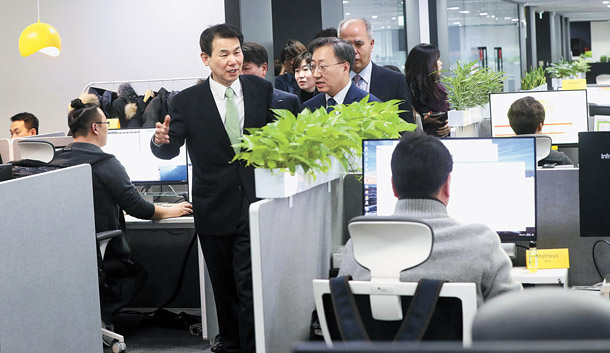 Kakao Bank, an internet-only bank in the final countdown to launch early this year, met with representatives from the Financial Services Commission on Monday to discuss its current status and plan for the near future.

The country’s financial regulator said it will arrange the necessary legislative measures to help the company successfully roll out its service during the first half. Kakao Bank is awaiting final approval from the government for a business license.

The internet bank made by a consortium led by Kakao, a tech company that provides the nation’s biggest messenger application, invited Jeong Eun-bo, the vice chairman of the FSC, to its office in Pangyo, Gyeonggi, the nation’s IT and start-up hub, to provide updates on its preparation effort.

Kakao Bank and K bank, another internet-only bank that is slated to launch its service shortly after the Lunar New Year, are expected to change the dynamics of the Korean banking industry. The banks would allow customers to complete all their basic banking business online, including opening up new accounts, eliminating the need for brick-and-mortar bank branches. Analysts expect Kakao Bank will start service as early as May.

“Kakao is planning on entering the new market that runs on an online- to-offline platform. Kakao can benefit from using its previous experience obtained from mobile network platform,” said Shin Geon-sik, an analyst at BNK Securities.

One of the pillars of the services provided by Kakao is the utilization of data in deciding a prospective borrower’s credit rating.

For instance, if a taxi driver with a credit rating of 6 tries to borrow money from local banks, the interest rate he qualifies for can be as much as 20 percent. Kakao Bank’s scoring system, however, will take factors other than one’s credit rating into consideration in its screening. The bank said it will use data such as the taxi driver’s records provided on the Kakao Taxi application, an on-demand taxi service app operated by Kakao, including customer reviews and driving records. The bank will also screen the driver’s shopping records provided by shareholder companies of the bank and its affiliates such as G-Market or Auction, some of nation’s largest e-commerce sites.

Through analyzing big data, internet-only banks could provide as much as 700 billion won as mid-rate loans with interest rates less than 10 percent to low or mid-income borrowers, the FSC said.

However, the tech companies’ attempts to find footing in the sector will be halted unless there is an overhaul in the current system. One of the major hurdles the companies have to overcome is the Banking Act, a law intended to separate banking from commerce.

The prevalent concern is that the law undermines ICT companies such as KT and Kakao of their autonomy in incorporating their technologies into financial services smoothly. Essentially, analysts worry that under the current law, these IT companies would end up watching from the sidelines. Although the legislature began discussions on the topic last year, it’s been shelved amid the current gridlock in the National Assembly over the political scandal involving President Park Geun-hye.