‘The King’ fends off ‘Confidential’ in battle of stars

‘The King’ fends off ‘Confidential’ in battle of stars 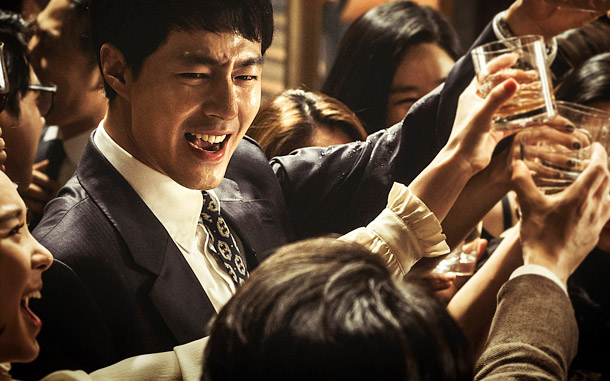 The drama, which depicts a man’s (Zo) descent into corruption and ascent to power at the sake of his pride and conscience, has so far earned 15.37 billion won since its release on Wednesday. It hit the million mark four days after its release, a feat achieved by previous hits such as comedy “Miracle in Cell No.7” (2013) which went on to sell more than 10 million admissions.

The other local new release “Confidential Assignment” debuted at second. Starring actors Hyun Bin and Yoo Hai-jin, the crime action, revolving around the joint investigation of detectives from the North (Hyun Bin) and South (Yoo), made a moderate performance to sell 845,000 tickets from Friday to Sunday, adding to its total sales of 1.15 million. 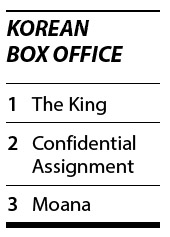 The two popular animated films “Moana” and “Your Name” followed respectively with 335,000 tickets and 260,000 tickets sold each. On Sunday, “Your Name,” directed by Makoto Shinkai, became the highest-selling Japanese anime ever in Korea with total 3.05 million admissions, shoving aside Hayao Miyazaki’s 2004 hit “Howl’s Moving Castle.”

“La La Land,” which swept seven prizes at the Golden Globe Awards and is also the Oscar frontrunner, came in sixth in its seventh weekend.

An espionage film starring Brad Pitt and Marion Cotillard, “Allied” ranked seventh, which was followed by local crime action “Master,” which dropped to eighth from last week’s third in its fifth weekend.

The extended edition of “The Lord of the Rings: The Two Towers” debuted at ninth while rookie director Xavier Dolan’s Cannes grand jury prize winning movie “It’s Only the End of the World” rounded up the top ten.