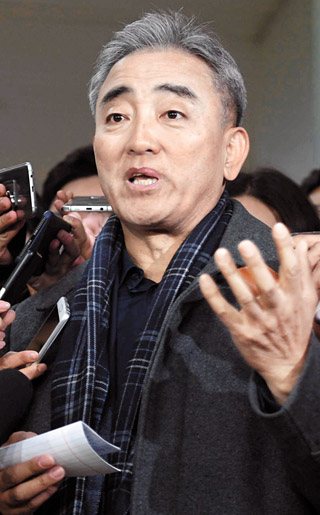 Former culture minister Yoo Jin-ryong said Monday that his appeals to President Park Geun-hye to stop the government’s oppression of artists critical of the administration was met with repeated silence.

Yoo, who served as Park’s first minister of culture, sports and tourism from March 2013 to July 2014, spoke to reporters before he attended an independent counsel’s questioning over the so-called blacklist scandal. Independent counsel Park Young-soo and his team, looking into the abuse of power and influence-peddling scandal of Park and her associates, is looking into the allegation that the administration created a blacklist of cultural figures critical of the administration and deprived them of funding and opportunities.

“I told President Park serious consequences would result if the blacklist was enforced, but she didn’t say a word,” Yoo said. “I told Park in January 2014 that she must not move forward with it. After the Sewol ferry’s sinking [on April 16, 2014], the [blacklist] campaign was expanding, so I paid my last visit to the president and made another appeal.”

According to Yoo, he met with Park on July 9, 2014, asking that the government stop enforcing the cultural blacklist. Park, however, gave no response, Yoo said. A few days later, Yoo was dismissed from his post.

“The blacklist definitely existed, and Kim led the campaign after he took the post as the presidential chief of staff,” Yoo said. “Kim made orders on the blacklist during the Blue House senior secretariat meetings and to me. And he forced the list to be enforced. I believe Kim is largely responsible.”

“The blacklist was created to discriminate and purge those critical of the administration by labeling them as the leftists,” Yoo said. “This is a serious act of crime. Systemically oppressing the critics of the government using the state budget and system is an infringement of the basic democratic order and constitutional values.”

Yoo said the police, prosecution, National Tax Service, Korea Customs Service and Board of Audit and Inspection were used to oppress those on the blacklist.

Yoo said authoritarian leaders, Park’s late father Park Chung Hee and Chun Doo Hwan, operated blacklists, but the practice ended after democratization. “But it was revived again,” he said. “The history of Korea was rewound back by 30 years. I thought we must correct this and punish those responsible.”

It was Yoo’s latest in a series of revelations about the blacklist. Although the JoongAng Ilbo reported last week that the independent counsel suspected that President Park was behind the order to create the blacklist, Park has denied the accusation and filed defamation suit.

The Ministry of Culture, Sports and Tourism offered to the Korean people an official apology on Monday, the first of its kind since it has been revealed since October of last year that many of its major projects have had inappropriate ties to presidential confidante Choi Soon-sil.

It also comes after allegations surfaced, also in October, that the ministry was behind cutting support for cultural figures, like artists, writers, directors, actors and entertainers with political inclinations that Park disapproves by drawing up and managing the so-called "culture blacklist."

“We feel extremely terrible and shameful about how we have led to problems about the fairness regarding support for culture and arts,” Vice Culture Minister Song Soo-keun said at the ministry in Sejong on Monday, “due to the list of artists who are excluded from public support.”

The ministry promised ways to improve its administrative system so that fairness in policies and supports for culture and arts can be guaranteed.

They include setting up a taskforce that consists of artists that will function like an ombudsman; as well as revising culture and arts promotion law so that unfair discrimination against artists or intervention from the government cannot happen.

Cho, who took the helm of the culture ministry in September, resigned from her post Saturday, shortly after being arrested that day on allegations she, along with ex-presidential chief of staff Kim, masterminded the creation and management of the blacklist.

Song, who was also summoned for the investigation regarding the blacklist, as a result is acting as the culture minister for now.