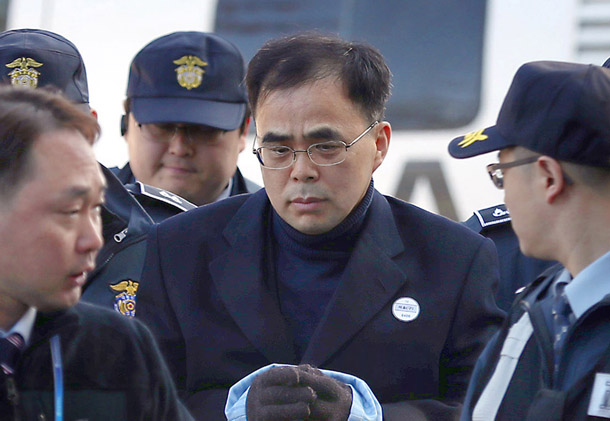 Kim Chong, former vice minister of culture, sports and tourism, testified in the morning at the Constitutional Court’s eighth hearing to determine whether to remove Park from office.

He said Park cited the need for government support for Chung Yoo-ra, the 20-year-old daughter of her longtime friend, Choi Soon-sil, during their meeting in January 2015. “It was shocking because the president outright mentioned her name,” Kim said.

Park was impeached in December for violating the Constitution and criminal laws during her presidency. One of the main charges cited by the National Assembly was allowing her secret inner circle, including Choi, to interfere in state affairs.

Kim, who served in the post from 2013 to October 2016, said he met with the president in January 2015 and Park talked about Chung.

According to Kim, Park complained about politicians’ criticism that Chung was receiving special treatment as if she was the princess of the equestrian community.

“Park said it is unfortunate that she was receiving negative reviews although she is an Asian game gold medalist,” Kim said. “She ordered the government to create an elite program for athletes with abilities and talents such as Chung.

“At the time, I was greatly shocked when she mentioned Chung,” Kim said. “And then I thought the elite program may be necessary because the PyeongChang Olympics and 2022 Tokyo Olympics are upcoming.”

Kim said Park referred to Chung by her birth name, Chung Yoo-yeon. She is currently in the custody of Danish law enforcement authorities and Korea is seeking her extradition.

Chung is also at the center of the massive bribery scandal involving Samsung Group. Samsung was accused of bribing Park through Choi by generously sponsoring Chung’s equestrian training and donating to cultural and sports foundations Choi controlled. The suspected bribes were worth 43 billion won ($37 million).

Kim also testified that Park condemned Rep. An Min-suk of the Democratic Party for having questioned Chung’s ability. Asked by the lawyers representing the National Assembly’s impeachment committee if Park had called An a “bad person,” Kim said, “She made a similar remark.”

The National Assembly’s impeachment motion stated that Park had abused her power and demoted two public servants because she was not satisfied by the sports ministry’s audit of the Korean Equestrian Association after Chung failed to win a competition in April 2013. Two officials, who conducted the audit, were later appointed to posts outside the ministry after Park called them “bad people” and ordered the assignments.

Rep. An attacked Chung in April 2014 during an inspection of the government by the National Assembly. At the time, he said Chung was receiving special treatment, such as being selected as a national equestrian athlete.

Kim admitted before the court that he had known Chung was the daughter of Choi and Chung Yoon-hoi, Choi’s former husband and Park’s former chief of staff for years after she started her political career as a lawmaker in 1998, before Park mentioned her name. When the opposition lawmakers pointed out the unfair process of selecting national equestrian athletes for the 2014 Incheon Asian Games, Kim, as vice minister, created a press release to refute this.

“After Rep. An raised the suspicion, Kim Ki-choon, then the presidential chief of staff, ordered me to respond aggressively,” Kim said. “He ordered me to issue a press release and have media interviews to silence the controversy.”

Kim also said Park, through her senior secretary for education and culture, ordered him in October 2015 to make a report to support the Korea Winter Sports Elite Center. The center was established and operated by Choi and her niece, Jang Si-ho. The center received about 1.6 billion won in sponsorship from Samsung Electronics.

“Park made the order by saying she had seen the center in a news report," Kim said. “Now come to think of it, Park knew that Jang established the project.”

Kim also admitted that he first met Choi in February 2014 and regularly contacted her until last year. They met once every one or two months until last May, and Kim said he kept in touch with her because Choi was Park’s associate.

According to the law governing the Constitutional Court, removal of the president is finalized when six justices agree. Justice Lee Jung-mi, who will serve as acting president of the court after Park’s retirement, will end her tenure on March 13, leaving only seven justices.

The court said Monday it will hold its 9th hearing on Wednesday, and Chief Justice Park will attend the session for the last time. The 10th hearing was scheduled for Feb. 1 and 11th hearing on Feb. 7.

Park’s lawyers on Monday said they want an additional 39 witnesses to testify before the court. The court selected six of them as witnesses and delayed decisions on the rest of them.
The court, which promised a speedy trial, expressed displeasure toward Park’s lawyers for their apparent stalling tactic by requesting that they summon witnesses en masse.

The National Assembly committee, which acts as a prosecution in the trial, last week withdrew its request to summon 10 out of its 28 witnesses and submitted their testimonies as evidence to reduce the number of hearings and allow the court to rule sooner.

“I am not sure why Park’s lawyers are seeking to summon people who will likely testify against the president,” Justice Kang Il-won said Monday after they requested additional witnesses. “What difference will there be if they speak?”